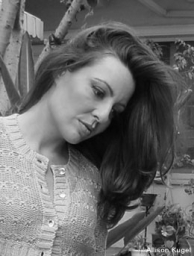 With her flare for relating to people and warming them up, Allison Kugel decided to try her hand at interviewing celebrities. A few stars took a chance on the little known interviewer, and from there it spread like wild fire! With a growing fan base of publicists, studios, and artists interviews started to come fast and furiously and Allison Kugel's celebrity interviews are now a gold standard in New Media legitimate celebrity coverage.

Allison has also freelanced for publications like US Weekly Magazine, Jewish Living Magazine and UCLA’s FEM Magazine. On the airwaves she was a guest American News Correspondent for 96.7 Ocean FM South England, delivering 30 minute American Political and Entertainment news reports monthly to the United Kingdom.

Some of her interviews include:

Allison donates to the ASPCA (American Society for the Prevention of Cruelty to Animals) and to PETA (People for the Ethical Treatment of Animals)... Visit www.aspca.org and www.peta.org to learn more about how you can help too!