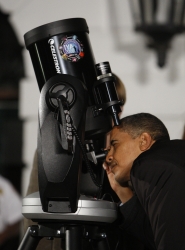 Torrance, CA, October 14, 2009 --(PR.com)-- Celestron® the world’s leading telescope maker and global sponsor of the International Year of Astronomy 2009, applauds the White House and President Barack Obama for their support of astronomy and science education. On Wednesday, October 8, 2009, President Barack Obama and the first lady Michelle Obama hosted what is believed to be the first star party ever to be held at the White House.

President Obama kicked-off the event with a brief address that was streamed live on the whitehouse.gov website. The program at the White House included more than 20 telescopes set up on the White House lawn focused on Jupiter, the Moon and select stars. President Obama, under the direction of his science advisor John Holdren, viewed a double-star in the constellation Lyra through a Celestron CPC 800 computerized telescope. "Celestron commends President Obama for his commitment to science education and support of astronomy. It is imperative that we all work together to bring awareness to our next generation about our place in the universe and the contributions that amateur astronomers can make to modern astronomy," said Joseph A. Lupica Jr, President and CEO of Celestron.

This star party was held to mark the International Year of Astronomy (IYA2009), which celebrates the 400th anniversary of Galileo's first use of a telescope. "What will your great discovery be?" Obama asked the students before viewing through the telescope. "Galileo changed the world when he pointed his telescope to the sky. Now it's your turn. We need your restless curiosity," the president said. Obama, his wife Michelle, and a group of 150 local middle-school students attended. Also in attendance were two 15-year-old amateur astronomers, Caroline Moore, who at age 14 became the youngest person to discover a supernova, and Lucas Bolyard, who discovered a rare type of ultra-dense star known as a pulsar. Former astronauts Buzz Aldrin, Sally Ride and Mae Jemison, and current astronaut John Grunsfeld joined the historical event as well.

Visit the websites below for information on other notable IYA events happening in 2009: