Sports Merchandise Leader NHL Store and MyReviewsNow.net Congratulate the LA Kings on their Historic Victory, and Invite Fans to Check Out the New Selection of Official Stanley Cup Championship Gear. 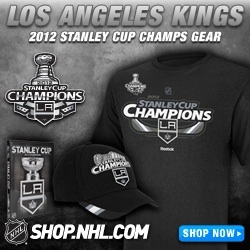 Las Vegas, NV, June 15, 2012 --(PR.com)-- MyReviewsNow.net, a virtual mall that lets people shop from home for the Internet’s best products, brands and services, is pleased to join its affiliate partner the NHL Store in congratulating the Los Angeles Kings on the franchise’s first Stanley Cup victory.

The NHL Store features a wide selection of official sports merchandise commemorating the Kings’ Cup victory. Fans can shop for hats, T-shirts, DVDs, locker room towels, and even pick up a replica 2-foot Stanley Cup for their home or office. Shoppers will also enjoy free shipping at the NHL Store when they use their Discover Card.

Plus, people looking for great gift ideas can also shop the NHL Store for great sports merchandise from all 30 NHL teams, including those that didn’t hoist the Cup this year, but will be poised to make an inspired run when the 2012-2013 season gets underway in the fall.

“MyReviewsNow.net is pleased to join the NHL Store in congratulating the Kings’ spectacular victory over the New Jersey Devils,” commented an Affiliate Relationship Spokesperson. “It was a very well played series by both teams, and entertaining hockey right down to the final whistle. And now, fans can celebrate alongside their hockey heroes by picking up official Stanley Cup Champion sports merchandise for themselves, or they can shop for great gift ideas for a lucky hockey fan on their list.”

Access to MyReviewsNow.net is free, open 24 hours, and there’s never any registration or membership. Plus, people can read helpful product reviews while they shop.

About MyReviewsNow.net
A virtual shopping mall of services, products and publications available online, MyReviewsNow.net is a business directory that sets itself apart from similar sites by offering both professional reviews and customer testimonials on the Internet’s hottest offerings in a fun, simple format that is easy for visitors to shop and enjoy.

About SEO Champion
SEO Champion was started in 1999 and is owner operated by Michael Rotkin, SEO Specialist for over 17 years. Michael Rotkin’s goal for his clients is to “own” keyword placements for the top 3 slots organically, so that his clients can earn a higher return on investment from their advertising dollars. Rotkin realizes the value of SEO over Pay-Per-Click campaigns, where click-throughs are generally more expensive and harder to convert into sales. SEOChampion’s intense work ethic can be seen in daily and weekly reports that show progress through organic keyword gain. This effort is the reason his SEO firm has been able to build a loyal client base for many years. Learn more at SEO Champion.
Contact
MyReviewsNow
Lina Andrade
702-462-6311
myreviewsnow.net