QUORiON, the German POS system producer, launches its new all-in-one POS system for small business. The small, embedded POS system will come with an integrated printer, an 8” touch screen, a built-in customer display as well as pre-installed POS software. The QTouch 8 can serve in virtually any business vertical. 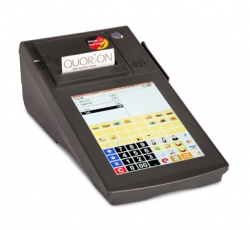 Erfurt, Germany, April 13, 2015 --(PR.com)-- QUORiON, the German POS system manufacturer, launches its new all-in-one POS system for small business. At the RSPA show in Orlando last year, the company already showcased a prototype POS system with the intention to produce it in 2015. The new QTouch 8 has evolved past the trial installations and QUORiON now stands ready to begin its full scale production.

The QTouch 8 serves as a cross-over model between the mobile and traditional POS worlds. With its 8 inch touch screen display, integrated printer, and small foot print, the company clearly directs the product at small businesses, who favor a traditional touch screen POS system. Small business owners face more POS options than ever before. However, the QTouch 8 POS system seems to lend itself to small business needs. “For small businesses it’s crucial to begin processing customers as quickly as possible. Because we have several POS peripherals built-in and pre-install our QMP POS software, there is little hardware installation that store owners need to bother with. From a dealer stand point, the modular components make service in the field easy and there are no additional software packages to install. They can begin system configuration immediately,” Patrick Grueschow, QUORiON’s VP says.

The QTouch 8 features the same Arm processor family as the rest of the QTouch series, which the company introduced over the past few years. “Standardization is key in any product line, as it facilitates easy repair and servicing,” Mr. Hesse asserts. Like its bigger QTouch 10 brother, the QTouch 8 sports a thermal printer with Easy-Load and auto cutter. “Users will be able to choose between 80mm, 58mm, or a no printer versions,” Cordula Rehfeldt, QUORiON’s Sales Director states. The POS system will have a number of built-in interfaces as well such as LAN, USB, and serial ports. “The interfaces will allow small business owners to support various peripheral devices like scanners, scales, external printers and so forth,” Matthias Hesse, QUORiON’s R&D Director adds.

Additionally, the built-in POS software lets small business owners customize the QTouch 8 to service their needs, irrespective of their business vertical. “We see owners of food trucks, bakeries, boutiques, and coffee shops deploying QTouch8s. It covers everything they need out of one box,” Mr. Hesse says. The POS system houses everything inside an impact and spill resistant plastic housing.

Noting these characteristics, one can easily understand how the QTouch 8 fulfills its promise in the utility department. “It’s not just that. While they appreciate usability, small business owners cannot afford to routinely buy new POS systems. They need to have something that lasts. In the past we have had units out in the Australian Outbacks and we never hear from them. That’s the kind of dependability we consistently strive for,” Mr. Grueschow explains.

For small businesses who require a cash register, but prefer to utilize touch screen technology, the QTouch 8 should represent a welcome addition to the POS market. It will be available in the USA as well. Contact QUORiON to find out more.
Contact
QUORiON Data Systems
Patrick Grueschow
1-877-442-7944
http://www.quorion.com
Mrs. Cordula Rehfeldt, Sales Director
Mail: sales@quorion.de

All in one POS system with integrated printer, 8" touch screen, customer display, and POS software.