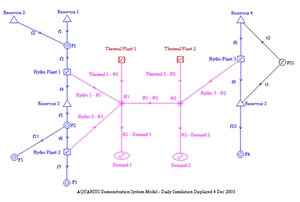 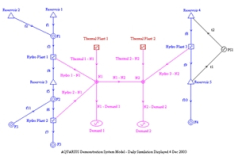 Program AQUARIUS has been developed by PWSC to simulate and optimise the operation of integrated water resource and power supply systems. It has been specifically designed to provide:

detailed modelling of hydro-thermal power generation systems operating in accordance with constraints imposed by multi-purpose water usage, multiple electricity demand centres, and generating plant and transmission constraints of both a technical and commercial nature;
a sophisticated Graphical User Interface (GUI) for defining the configuration of the system to be modelled, and for the input or modification of associated data via on-screen templates;
robust Linear and Dynamic Programming algorithms for, respectively, the daily optimisation of system operation and the long-term optimisation of stored water values;
automatic database storage of simulation results, including load dispatch details and marginal costs, so as to provide full modelling transparency and facilitate regulatory audit;
'real time' graphical screen displays of system behaviour, and the display and high definition printed output of database generated time series of any combination of simulation results;
a generalised software package equally applicable for optimising day-to-day operation, as well as development planning and commercial contract evaluation applications. top
Development Philosophy

AQUARIUS builds on experience gained from the successful application of PWSC's earlier programs for simulating water resource and hydro-thermal generation systems (Program SYSIM), and for simulating and optimising the operation of large scale water resource/water supply systems (Program MOSPA). Initially constructed as FORTRAN 'batch' programs, SYSIM and MOSPA incorporate logical rules to allocate resources in each simulation time step, rather than formal optimisation algorithms. In this way computation times are contained when simulating complex systems over long hydrological sequences. More recently, PWSC has developed Microsoft Windows based GUI's for both programs in order to simplify the entry and modification of input data, and to provide comprehensive facilities for the screen and hard copy display of results in tabular, graphical and 'mimic' diagram form. top

The impetus for developing AQUARIUS arose from a number of considerations and observations associated with the evolution of hydro-thermal power systems, including:

the increasing complexity of the such systems and, in particular, the growing need to adequately model multiple demand areas and associated transmission constraints when simulating and optimising their operation;
the advent of private sector participation in electricity generation and transmission, and the consequent need to model constraints on system operation such as those imposed by Private Power Agreements (PPA's) while providing transparency of load dispatch and stored water usage decisions to both market participants and industry regulators;
the increasing use of 'engineering' software packages by non-specialists, and the consequent need to simplify the construction of system models and reduce the likelihood of program malfunctions due to the entry of inappropriate data;
increased expectations with respect to the 'user friendliness' and robustness of 'technical' software. top
The scope and design of AQUARIUS has also been influenced by continuing advances in computing power and disk storage, which now enable the incorporation of analytical methods not previously compatible with detailed and lengthy simulations of complex system operation.

At the same time, the development of programming languages such as Microsoft's Visual Basic now enables 'engineering' type programs to be written directly within a Windows compatible environment with execution times comparable with versions written in 'scientific' languages such as FORTRAN. An additional advantage of the Visual Basic language is that it allows direct read and write access to common database structures. top

The above sets of considerations led to the following key features being incorporated within AQUARIUS:

a menu driven 'drag and drop' facility for the 'on-screen' definition of system components and their physical connections, and printer output of the resultant annotated diagram;
interactive input or modification of all model data including user defined component names, but excluding time series files, via on-screen component type specific templates;
the representation of multiple electricity demand areas, with load duration blocks of user defined duration, transmission lines and transmission network nodes;
automatic formulation of the Linear Programming (LP) input matrix based on the user-defined system diagram and input modelling data, and including penalty variables to ensure that a 'feasible' solution is obtained even if, due to constraints, demands cannot be satisfied;
a proprietary Linear Programming algorithm for determining the least-cost operation of the integrated water resource and hydro-thermal generation system in each simulation time step;
the usage of regulating reservoirs in accordance with input Stored Water Values ($/m3) which, for each reservoir, can vary as a function of storage volume and calendar month;
the facility to select a daily, weekly or calendar monthly simulation time-step;
automatic creation of a system specific (Microsoft ACCESS) database and the storage of detailed results for each simulation time step;
comprehensive on-screen and printed graphical output facilities, enabling the user to plot any combination of values stored in the database as time series or as accumulations over weekly, calendar monthly or annual time periods;
saving of all system model data, including system configuration but excluding time-series input files, within a single disk file so as to simply retrieval and archiving;
an on-line help system. top
AQUARIUS has been designed to enable the simulation and optimisation of water resource and hydro-thermal power systems in considerable detail, in terms of both reservoir release and load dispatch optimisation. A key attribute is that simulations can be carried out at an appropriate level of detail viz. with a daily, weekly or monthly simulation time step and different numbers of load blocks, as appropriate to the available data and specific application objectives.

In line with PWSC's overall modelling philosophy of fully integrating detailed simulation and mathematical programming optimisation techniques, AQUARIUS also incorporates PWSC's generalised Stochastic Value Iteration Dynamic Programming algorithm for the optimisation of (long-term) Stored Water Values on either a calendar monthly or weekly basis. When combined with a detailed representation of the system and load dispatch, a fundamental attribute of the methodology is that the user can have confidence that the resulting Water Values are 'practical' in terms of complying with system operation constraints