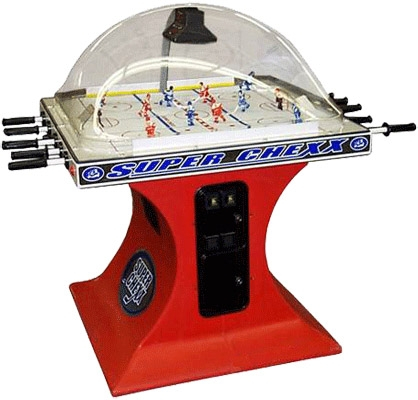 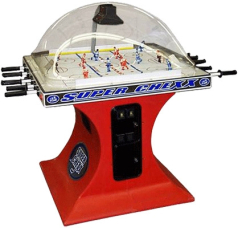 Description:
Also known as Bubble Hockey because of the very distinguished, indestructible dome that covers the playfield. The game can be played as a one on one game, or in many cases, especially for tournaments, it is played two on two. The game’s new electronics record GOALS, SHOTS ON GOAL, PERIOD, and RUNNING TIME. The running time is operator adjustable. There is an automatic puck return system, overhead dome lighting, and if a game is tied after the normal game play it will automatically go into sudden death overtime - so there's always a winner!!!

Super Chexx was most recently used by Anheuser - Busch's, Bud Light, who is the official sponsor of the NHL. The game was seen on commercials nationwide.

SUPER CHEXX can be found in many entertainment centers, arcades, bars, restaurants, pubs, bowling alley's, ice rinks, pool halls, and even homes worldwide!!! The game has been sold in over 52 different countries worldwide.