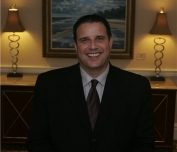 While many know Bob Reina to have quite a sense of humor, it's no joke when he says: "In order to be successful, it takes commitment over a period of years, and I mean a lot of them." Self-discipline helped him remain farsighted in a career that had many bumps as well as forks in the road. Bob juggled several jobs while completing his coursework at the University of South Florida, and he eventually went on to graduate number one in his police academy class. Anyone recognizing his picture might be having a flashback of Bob pulling them over during his patrol days. In response to an entrepreneurial itch, however, Bob began using good old-fashion desire and sweat to make it as a part-time associate in direct selling. His passion for marketing led to boldly giving-up a steady paycheck. Family and friends called him crazy, but he had a clear-cut vision for success. In a recent survey, "Bob's vision" was actually the reoccurring reason that Talk Fusion's marketing and technology experts joined his team. He brings insight and dedication to work, and he also brings family pets (like his loyal dogs Shadow and Bindi) to the office each day. Therefore, it is no surprise that much of Bob's free time goes to actively supporting non-profit groups to help animals.