This Week is designed to make it easy to stay focused on the people, events and things that benefit our lives. They've gathered every relevant resource they could get their hands on and are offering them to the world for free. The Week of the Dream is both an invitation to share in the quantum power of positive thinking and the opportunity to develop a global community of shared vision. 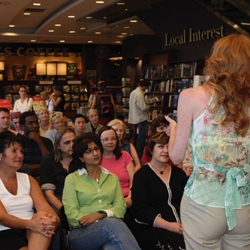 Vancouver, Canada, February 23, 2007 --(PR.com)-- Dreaming is a lost art with the power to change the world one mind at a time.  One West Coast author is poised to both exponentially increase the number of dreamers in the world and give them the tools to make a difference.

March 25-31, 2007 is the 2nd Annual Week of the Professional Dreamer.  At its crux is an interesting question: can six simple steps and seven days change your world?

ghalil is the writer of Professional Dreamer: 6 Simple Steps that turn Dreams into Reality.  Together with like-minded creative evolutionists, she is hosting a week long forum on the power of positive thinking and focused imagination.

“Each of us here is committed to calling on the world to think higher thought and act according to higher thoughts and emotions,” says ghalil, whose name translates as ‘touching the earth and heavens within’.  “This week is designed to make it easy to stay focused on the people, events and things that benefit our lives.  Every day of the week is packed with hour after hour of life-transforming seminars, workshops, guided meditation sessions, audios, reports, stories and interviews with a single goal in mind - making YOUR dreams a reality.”

She hopes to bring greater numbers in touch with the same creative source that saved her own life and gave her book a life of its own.  Since its release by One Mind Publishing, Professional Dreamer has already already earned homage from the mentors in the film The Secret and a cameo on Oprah.

“It’s a matter of changing the way we communicate: with each other, with the world and most importantly, with ourselves.  Professional Dreamer Week is our way of tossing a positive pebble of possibility in the pool,” she explains.

Change has become something we both accept and expect.  According to ghalil, it is too rarely something we actively direct. Therein lies both the art and the science of professional dreaming.

Combining scientific constructs with the principles of metaphysics, ghalil follows in footsteps forged by physicists and spiritualists alike: thought is energy.  Ideas matter.  With enough focused intent and imagination, ideas become matter.  In short, a little dream can go a long way.

The Week of the Dream is both an invitation to share in the quantum power of positive thinking and the opportunity to develop a global community of shared vision.  With monies being raised for charitable contribution to the Cancer Foundation, a full calendar of events for Professional Dreamer Week can be found at www.professionaldreamerweek.com.

To arrange for an interview time with ghalil, contact Patricia Baun at patricia@professionaldreamer.com or phone 604-999-7792.