Enables Direct Analysis of Gas, Liquids and Solids in Seconds

Saugus, MA, May 28, 2009 --(PR.com)-- IonSense, Inc. will introduce its lower cost, compact Direct Analysis in Real Time (DART®) Mass Spectrometry Platform at the upcoming ASMS Conference in Philadelphia May 30th through June 4, 2009. The new DART SVP utilizes an Apple iPod® Touch to control all aspects of the analysis with menu driven apps conducting even the most complex experiments with minimal user interaction. In addition the DART SVP has a simple and efficient automated sampling system built into its design to provide for more routine analysis of compounds in pharmaceutical, forensic, and chemical applications.

The company will also showcase its “Green Cartridge Technology,” now built into every DART system. “The new DART SVP uses nitrogen instead of the more expensive and scarce helium and is an important advance for the analytical scientist who may want to reduce the use of organic solvents for routine analyses while still providing critical results,” according to Dr. Brian Musselman, IonSense CEO. The DART SVP will also allow the company to expand its sales overseas in developing markets where helium and solvents are not readily available.

The company will host The DART Forum and Reception on Sunday, May 31st for those interested in the latest developments of DART technology and applications. Highlighted speakers include scientists from Merck & Co., the US EPA, Northrop Grumman, and academic institutions including The University of the Pacific, and Georgia Tech. Registration and the Agenda can be seen at www.ionsense.com.

Additionally at the Conference over 20 presentations from companies such as Merck, Millennium, and Pfizer, government agencies such as CDC, FDA, and EPA, and numerous academic institutions will demonstrate the application of DART mass spectrometry to problems in many areas such as:

IonSense will also present the new DART SVP Platform at the Exhibition being held during the conference. The company will be at Booth number 81. 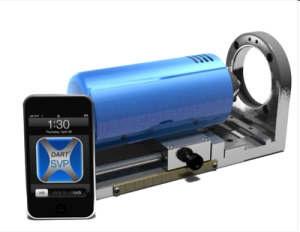 The new DART SVP Source with iPod Control from IonSense