ASU is the college of choice for undergrad Native Americans attending on an AIEF scholarship.

Of 176 undergraduate scholarships awarded this year by AIEF, 41 of the recipients are attending Arizona colleges and universities. Eighteen of those students are enrolled at ASU for the 2009-10 academic year. Northern Arizona University and the University of Alaska-Anchorage are second, with eight students each.

“We are just elated to see so many American Indian students seek and apply for scholarships at ASU, and particularly these from AIEF,” says Michael Begaye, executive director of ASU’s American Indian Student Support Services.

“We work very closely with 25 different reservations in Arizona and New Mexico alone, two states that AIEF and the NRC (National Relief Charities) recognize as the most impoverished or to have the least access to outside resources. This is an issue of access, and we are proud of making the programs and resources of this university available to so many students who might not otherwise have the opportunity to pursue higher education.”

For Angela Matus, her AIEF scholarship is the realization of an unreachable dream. A member of the Pascua Yaqui Tribe, Matus graduated early from Tempe Marcos de Niza High School in 2008 as a member of the dean’s list. The 20­year-old biological sciences major in ASU’s School of Life Sciences is following in the footsteps of her mother, who graduated from the Tempe campus with a B.A. in education and is currently working on her master’s in American Indian education. The younger Matus says the scholarship to ASU not only provides her with a university education, but also will allow her to pursue a dream.

“In this economic crisis, I needed to help myself – education was important to me,” she says.

“My mom brings me strength and courage to do what she did, to surpass the limits and come back home to help our people, and to receive this scholarship brings me great joy. Now, AIEF has given me the empowerment and passion to live proudly and work harder.”

She says she has found her calling at ASU. “This year, as a college student, I have been able to do what I want to do, which is to help educate the Native American students in the ASU community the value of fitness.” Matus has pursued her interest in fitness through her leadership of the Native American Wellness Society (NAWS) at ASU, where she serves the club as president.

"While at ASU, I am gaining knowledge, leadership and friends," she says. "Being president of NAWS is one thing that was not in my plans while attending ASU, but I am very proud to have the opportunity. “If I didn’t have the friends I have met at ASU, native or not, I wouldn’t have been able to be where I am now – at the top of the world with an aspiration to change it.”

“Simply put, the AIEF scholarship removed my financial worry," he says. "This year in particular, my career and my life almost hinges around being able to afford the things my craft requires. From a computer to communicate, design and research; to papers, books, workshops and seminars; to acquire new skills in acting.

"I have a concentration in acting for the theater program here, but I will either stay here for a while doing theater or move directly on to graduate school. I am honing my skills as an actor to be a voice for those who want to speak but oftentimes are never heard,” says Laine, 20, who notes the large Native American student population at ASU played a part in his selection of the university.

AIEF is one of the country’s largest grantors of scholarships to Native Americans, funding about $450,000 for more than 200 undergraduate and graduate students annually. Of these recipients, nearly half are first-generation students. AIEF awards look beyond grade point averages and standardized test scores for students who exhibit passion, resiliency and leadership skills. 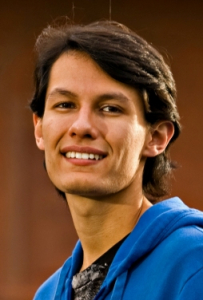 Laine Nelson is one of 18 Native American students attending ASU on an AIEF scholarship.