7 year-old Jamie Ashbourne, disheartened with the impersonal nature of donating unwrapped toys into cardboard boxes, has created an organization that will deliver the wrapped wishes of families in need.

Jensen Beach, FL, November 22, 2012 --(PR.com)-- Last holiday season, Jamie Ashbourne didn’t like the idea of not being able to see where toy donations went. He wanted to contribute, he just though it could be done on a more personal level. He started wrapping his donations and then bought more until he had a sack of toys that would rival Santa’s. The problem was he had nowhere to deliver it, he had it in his mind that he would dress as Santa and take it somewhere to see the children’s reactions, but it was just days befor Christmas and most drives were already finished. The Gertrude Walden Child Care Center in Stuart, Florida welcomed Jamie, with open arms and stunned faces of joy. It was a last minute sprint for him to pull it off but the staff and the children’s faces, made it all worthwhile.

This year he’s getting a head start to plan it better so others will know what his mission is and maybe even get in on the cause. He even has a new Santa suit, not his handmade one, so he is very serious about doing things right.

His big delivery day at Gertrude Walden is December 19th and the children have submitted their letters to Santa. Jamie is also waiting to hear from Sandy relief efforts to see if he can help families in New York and New Jersey. Jamie’s Elf Factory is set up to take donations and additional wishes online, at elffactory.org or you can just visit and read about one little guy on a mission.
Contact
Jamie's Elf Factory
Laurie Ashbourne
407-421-2293
elffactory.org

One little guy on a mission 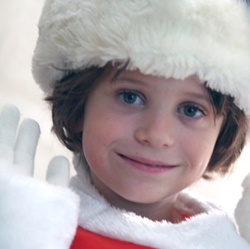