Las Vegas, NV, March 21, 2013 --(PR.com)-- Fifteen months of corporate transition culminated last week when more than 3,400 independent brokers and sales agents for Prudential Real Estate gathered here for their annual sales convention. In addition to recognizing its top producers, the new logo, visual identity and game plan for the Berkshire Hathaway HomeServices brand was revealed for the first time in an elaborateproduction set on Celine Dion’s stage at Caesar’s Palace.

For the 12th consecutive year, the messaging architects at Dallas-based Corporate Magic were asked to orchestrate a seamless, two-day extravaganza that would celebrate, inspire and inform the company’s most important representatives.

“This year’s convention is arguably our most significant meeting in years because it’s here that our much-anticipated transition to the Berkshire Hathaway HomeServices brand becomes official,” said Denise Doyle, Director, Conference & Meeting Services at HSF Affiliates LLC (Prudential Real Estate’s parent company). “Once again, Corporate Magic not only created a spectacular production, but they helped design and execute a series of events that delivered on the promise of our most important sales gathering of the year.”

The March 10-12 convention was set in The Colosseum at Caesar’s Palace, and carried the theme “Hit Play: Every Moment Matters.” With each new speaker and video production, a giant “Play” button was hit, indicating an important transition point.

“Because of the magnitude of this year’s event, Prudential Real Estate selected Celine Dion’s huge stage at Caesar’s, which provided the perfect backdrop for our speakers and video presentations,” said Meg Lohr, Corporate Magic’s International Account Manager. “We were especially excited to work with Celine’s massive video screens, which enabled us to create some extraordinary visuals that our audience won’t soon forget.”

The centerpiece of The Coloseeum’s stage is a 34’ x 110’ LED screen, rivaled only by the world’s largest LED screen hanging in Dallas Cowboys Stadium in Arlington, Texas. Underneath the giant 11mm high-resolution screen were nine LED panel screens ranging in size from 2' x 6' to 8' x 6', also from Celine’s set. Projection screens measuring 16’ x 9’ flanked each side of the giant video wall.

Monday’s general session was packed with important information that Prudential Real Estate network brokers and agents had been eagerly anticipating, including an emotional speech by EarlLee, CEO of HSF Affiliates LLC and President, Prudential Real Estate, who shared his vision for the company’s future, along with his strategy for fulfilling it. A video entitled “Who is HomeServices” was followed by remarks from Ron Peltier, Chairman and Chief Executive Officer, HomeServices of America. Warren Buffett, Chairman of Berkshire Hathaway, Inc., addressed the attendees via video message, then introduced a dramatic video reveal of the new branding elements for the Berkshire Hathaway HomeServices real estate brokerage brand. This marked just the second time Buffett had allowed a corporate subsidiary to integrate the parent’s name into its own.

The session then transitioned to an awards ceremony for the company’s top earners, who walked across Celine’s 120-foot wide stage in regal style to be recognized. The day’s events concluded with Craig and Marc Kielburger presenting their inspiring story of how the two brothers are changing the world through their “Free the Children” and “Me to We” charities.

Tuesday’s meetings started with a bang as Corporate Magic unveiled a series of one-of-a-kind candid videos using the wildly successful and popular “lip dub” technique. It proved to be a fun and innovative approach to highlighting the convention and its attendees.

Tuesday’s Keynote Speaker was Peter Diamandis, Chairman & CEO of the X PRIZE Foundation, who laid out his contrarian view that we will soon be able to meet and exceed the basic needs of every man, woman and child on the planet. Each audience member received a free copy of Diamandis’ groundbreaking new book, “Abundance: The Future is Better Than You Think,” and the 300 members of Prudential’s Chairman’s Circle were invited to a private Q&A session with the dynamic speaker following his address.

As the event drew to a close, attendees were treated to a 31-piece orchestra, an award-winning director, breathtaking visuals and the one-and-only Celine Dion. The chart-topping diva performed a moving rendition of Billy Joel's "Lullaby (Good Night, My Angel)," recognized the audience packed with Prudential Real Estate representatives and thanked the company for its support of the Sunshine Kids charity.

Because this year’s convention held special importance, Prudential Real Estate tasked CorporateMagic with the challenge of delivering the event to the company’s entire 50,000-plus-person network. Corporate Magic’s solution was to produce a daily “Web Blast” via a highly interactive website, featuring HD footage of the show packaged with two actor-hosts narrating the entire two days of events.

“Our goal at Corporate Magic is not just to create a once-in-a-lifetime event that moves an audience to act, but one that resonates within the attendees long after they return home,” said Lohr. “The web blast was a perfect vehicle to remind attendees what they learned and how they felt at the convention, and to enable a far larger part of the network to absorb the same information and connect emotionally with the presenters as if they were with us in Las Vegas.”

“As always, Corporate Magic hit it out of the park,” said Doyle. “The ‘Hit Play’ theme was perfect, the speakers were spot-on, and the entire production on Celine’s stage was magical.”
Contact
Corporate Magic
Ladd Biro
972-724-3039
www.corporatemagicinc.com
Champion Management is proud to be Corporate Magic's public relations agency of record. 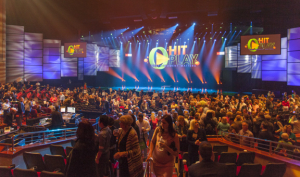