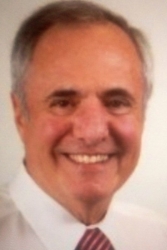 Scottsdale, AZ, March 14, 2014 --(PR.com)-- Howard M. Gerelick of Scottsdale, Arizona has been included in the Strathmore’s Who’s Who Worldwide Edition for his outstanding contributions and achievements in developing supermarket anchored shopping centers.

About Howard M. Gerelick, Owner
After over 40 years in developing shopping centers as a developer and developing new stores for Albertson's, Kroger, and Safeway, Howard retired from Safeway where he was the Vice President of Real Estate responsible for developing new stores in their Denver, Phoenix, and Texas Divisions. He has formed a retail and shopping center consulting company, hgc in Scottsdale Arizona to use his extensive knowledge and experience in shopping center development and site location to provide consulting services to developers, retailers, and cities on shopping center development, identifying retail locations, and mixed use development. During his career, he has been a speaker on ICSC panels, given lectures at several universities on site location research, and has served on various cities task forces advising and recommending changes to zoning, strategic long term planning, smart growth, and was responsible for revising the highway access codes for Colorado. Most recently he served as the Co Chairman of the Food Dessert Task Force for Denver to help the city develop incentives to encourage developing supermarkets in underserved areas of the city. Howard has a BS degree in accounting and economics from the University of Nebraska - Lincoln. He enjoys golf, traveling and family activities in his spare time. He can be reached at hgerelick@gmail.com.