Prince William and NYC Mayor Bill De Blasio awarded SeamlessDocs' CEO Jonathon Ende the GREAT Tech award for an innovative company that can provide a technology service to assist and advance international paper and form based processes. Hundreds of US applicants were evaluated by CEOs and executives from companies like Tumblr, Mashable, and the Guggenheim Partners before being awarded.

New York, NY, December 11, 2014 --(PR.com)-- The Duke of Cambridge, also known as Prince William, accompanied by Mayor Bill De Blasio of NYC awarded SeamlessDocs CEO, Jonathon Ende, the GREAT Tech award yesterday at the Empire State Building. This is the second year the UK Trade & Investment Department (UKTI) has issued such awards, but SeamlessDocs' selection is the first time the UK government has taken significant steps to evaluate and reform their paper and form based processes.

“We are honored to receive such a prestigious award. This is an exceptional opportunity for SeamlessDocs to uncover and correct inefficiencies within the United Kingdom, as well as provide an intuitive and advanced service for the international community,” said CEO, Jonathon Ende.

The UKTI Department recognizes innovative US companies with the award in order to partner with and provide international assistance to set up and grow their business in the UK. SeamlessDocs was chosen out of hundreds of US applicants and will be representing the United States in the media category.

GREAT Tech Award winners were judged by the following executives:

About SeamlessDocs
SeamlessDocs.com and its subsidiary SeamlessGov.com are the future of paperwork and forms. The SeamlessDocs platform instantly converts PDF documents into cloud versions that can be filled out, electronically signed, and submitted with payment and attachments from any device. SeamlessGov.com is currently working with domestic cities like Los Angeles, CA, Jersey City, NJ, and Atlanta, GA to affordably automate and create a seamless workflow for their business processes.
Contact
SeamlessDocs
Tyler Wallace
949.351.7586
www.seamlessdocs.com 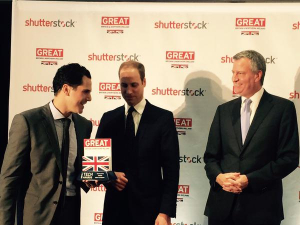