New York, NY, January 28, 2015 --(PR.com)-- Prime Minister Cameron took a trip to Washington D.C. to talk with civic minded start-ups before his meeting with President Obama. The meeting focused on cyber security and technology in the public sector. On hand were original 1776 start-ups, as well as investors like AOL’s co-founder, Steve Case. This is the second time this year the United Kingdom has looked at US companies to lead the technology surge abroad. First, Prince William honored companies like SeamlessDocs for their growth and potential to be major contributors to international governments.

1776 provides a platform where talented entrepreneurs get connected with affluent & civic minded experts. Located in the political capital of the world, 1776 also is in reach of five of the wealthiest counties in America. SeamlessDocs along with other 1776 members are using this opportunity to cement themselves as government leaders for the domestic and international communities.

“1776 provides a one of a kind opportunity,” said Jonathon Ende, CEO, SeamlessDocs. “We fly a SeamlessDocs associate out every month to participate in the round table event. The connections we have made and the connections we will continue to make are vital to the future of government technology. Prime Minister Cameron visiting 1776 is a great example of the positive impact we are having on governments.”

About SeamlessDocs:
SeamlessDocs.com and its subsidiary SeamlessGov.com are the future of paperwork and forms. The SeamlessDocs platform instantly converts PDF documents into cloud versions that can be filled out, electronically signed, and submitted with payment and attachments from any device. SeamlessGov.com is currently working with domestic cities like Los Angeles, CA, Jersey City, NJ, and Atlanta, GA to affordably automate and create a seamless workflow for their business processes.
Contact
SeamlessDocs
Tyler Wallace
949.351.7586
www.seamlessdocs.com 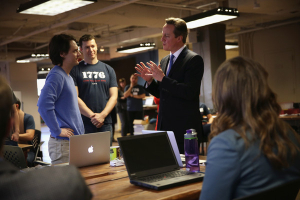