As the election season enters its critical final phase, John McCain and Barack Obama continue their battle for the crucial Catholic swing vote in the October issue of U.S. Catholic magazine. The two answered a set of identical questions of interest to Catholics in interviews conducted via e-mail. The questions covered a wide range of issues—from abortion, stem cell research, and the death penalty to economic justice, the environment, universal health care, immigration, and the war on terror.

Chicago, IL, September 12, 2008 --(PR.com)-- The majority of Catholic voters has lined up with the winner of the popular vote in the last nine presidential elections. Don’t think this fact is lost on the 2008 presidential nominees of both major parties. As the election season moves into its critical final phase, Senators John McCain and Barack Obama continue their battle for the crucial Catholic swing vote in the pages of the October issue of U.S. Catholic magazine.

McCain and Obama answered a set of identical questions of interest to Catholics in interviews U.S. Catholic conducted with them via e-mail. The Chicago-based Catholic general-interest magazine asked questions that covered a wide range of issues—from abortion, stem cell research, and the death penalty to economic justice, the environment, universal health care, immigration, and the war on terror.

McCain pointed with pride to “my 25-year pro-life record in Congress” and reiterated his opposition to partial birth abortion and his support for the reversal of Roe v. Wade. Obama, meanwhile, strongly reasserted his pro-choice stance, but he told the magazine, “No one is pro-abortion, and I respect that people of good faith will disagree on this issue.” Obama was more in tune with the Catholic approach to some of the other issues.

In the U.S. Catholic interview, McCain cautioned Catholic pro-lifers that “the reversal of Roe v. Wade represents only one step … in the long path toward ending abortion. Once the question is returned to the states, the fight for life will be one of courage and compassion—the courage of a pregnant mother to bring her child into the world and the compassion of civil society to meet her needs and those of her newborn baby.”

Obama continued his recent emphasis on working to reduce the number of abortions. “Much more can and should be done to address the underlying factors that may lead a woman into the difficult situation where she feels she has to make this decision.” He said he wants to make comprehensive age-appropriate sex education more widely available to help prevent unintended pregnancies. And he wants to offer more support services for women who choose to have a child, including pre- and postnatal care, parenting education, and adoption and foster care services.

Obama told the Catholic magazine, “My own path to Christ was shaped in part by my work as a community organizer with the poor and disadvantaged on the South Side of Chicago,” and he noted that this work “was funded in part by Catholic churches.” He said he wants to expand the earned income tax credit and “establish 20 ‘Promise Neighborhoods’ in impoverished, crime-ridden areas to be modeled after the Harlem Children’s Zone.”

McCain emphasized the need to “help Americans who are hurting from soaring gasoline and food costs,” again highlighting his plan for a “summer gas tax holiday” and his support for increased domestic oil drilling. He told U.S. Catholic that to help the poor he would also “overhaul unemployment insurance and make it a program for retraining, relocating, and assisting workers who have lost a job.”

Obama pointed out that as an Illinois state senator he was a co-sponsor of the Bernardin Amendment, named after the late Chicago Cardinal Joseph Bernardin, “which set out that health care is a fundamental right.” His health care plan, he told U.S. Catholic, would provide all Americans with “quality, portable, and affordable health care coverage” and would reduce health care costs for families to $2,500.

For his part, McCain said he would use competition to improve the quality of health insurance and would reform the tax code to offer more choices beyond employer-based health insurance coverage. He said he also believes that “we can and must provide access to health care for every American.”

The editors of U.S. Catholic quoted Pope John Paul II’s reminder, spoken before the war in Iraq, that “war is always a defeat for humanity” before asking the candidates about their positions on the war on terror. In particular, the magazine wanted to know, “How would you respond to future challenges to global peace such as a terrorist attack on U.S. soil or an escalation of the situation in Iran?”

McCain answered, “Defeating radical Islamist extremists is the transcendent national security challenge of our time…. Those who plan, train, and conduct terrorist attacks against America … will feel the full wrath and weight of American power.” He added, “There would be no sanctuaries and no mercy.”

But McCain also agreed that the United States cannot lead by virtue of its power alone. “Leadership in today’s world means accepting and fulfilling our responsibilities as a great nation.”

Obama acknowledged that “there may be times when force is necessary—to stop an imminent threat to America or an ally, for example.” But he promised that it is “a decision I will never take lightly.” He emphasized the importance of combining military power with “using tough, smart, and principled diplomacy.” The Democratic presidential nominee expressed “deep respect” for Pope John Paul’s opposition to the invasion of Iraq—not failing to mention his own opposition to the war—as well as for Pope Benedict XVI’s “ongoing call for peace.” He repeated one of his trademark campaign phrases: “Now we need to be as careful getting out of Iraq as we were careless getting in.”

U.S. Catholic’s editor, Claretian Father John Molyneux, said he was delighted that both presidential candidates took the time to address the particular concerns of Catholic voters in their interviews with the magazine—a first in the history of the 73-year old publication.

“The Catholic Church’s positions don’t fit neatly with either of the two major parties,” said Molyneux. “Our strong commitment to respect for life is complemented by an equally proud tradition of Catholic social teaching, which promotes social justice, a preferential option for the poor, the common good, and peace.”

The interviews with Senators McCain and Obama are part of a U.S. Catholic special issue for the 2008 election, which also includes a survey in which readers—Democrats, Republicans, and independents—share how their Catholic faith guides them in their decision-making this year. Also in the October issue, Washington Post columnist E. J. Dionne offers an in-depth analysis of the Catholic vote, while a feature article examines what Catholic parishes are doing to educate their members for “faithful citizenship.”

A limited number of U.S. Catholic’s special election year issue are available for parish bulk orders. To order, call 800-328-6515. U.S. Catholic magazine is published by the Claretians, a Roman Catholic religious community of priests and brothers. It is the most award-winning religious general-interest magazine in the United States.

The full text of the interviews is posted on the U.S. Catholic website at
http://uscatholic.org/culture/social-justice/2008/09/talking-points.

For more information or to subscribe to the magazine, visit www.uscatholic.org. 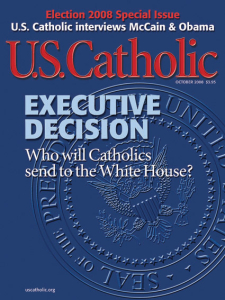