As a commentary on censorship in China, hot new artist R. Lloyd Ming creates a sculpture in which Buddha experiences true enlightenment by worshiping the Playboy Bunny logo as a modern-day golden calf.

New York, NY, March 19, 2009 --(PR.com)-- R. Lloyd Ming's sculpture, made for his current solo art show, is called 'True Enlightenment Deferred.' It is a Buddha statue meditating in front of neon Playboy Bunny logo and it is meant to be a commentary on the censorship in China, particularly the censorship of pornography. "Playboy magazine founder, Hugh Hefner has always said that he photographed the girl next door," says Ming. "I always thought of them as the Gods next door because the women in the magazine were and still are as close to airbrushed God-like perfection as you can get. Countless men have idolized those women so it was easy for me to imagine the Buddha idolizing a glowing Playboy Bunny logo."

About R. Lloyd Ming
R. Lloyd Ming uses photography, video art, installation and sculpture to ask hard questions about society. He is inspired by artists who use found or readymade objects to create their work and Ming typically also works in this way. Notable influences are Marcel Duchamp, Subodh Gupta, Ai Weiwei, Fred Wilson, Haim Steinbach, Joseph Cornell, Louise Nevelson and Felix Gonzalez-Torres. Ming is particularly influenced by the work of American artist Robert Rauschenberg. Throughout his career Rauschenberg used objects he found on the street to make sculptures he called combines. As a result Ming refers to his sculptures as combines. 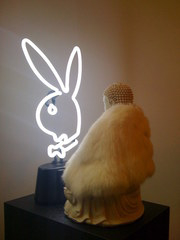 R. Lloyd Ming's sculpture, made for his current solo art show, is called 'True Enlightenment Deferred' and is a commentary on censorship in China.