The victim is feared to be in extreme danger. The father has threatened to kill himself and the child. 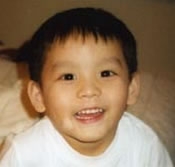 Springfield, IL, August 05, 2006 --(PR.com)-- An Amber Alert has been issued for Andrew Moua (5) from Brooklyn Center, Minnesota, authorities report he was abducted by his father Xou Moua.

Authorities report Andrew Moua was abducted from his home yesterday. Earlier today the father called the child's mother saying he was going to kill himself and the child.

The child is described as Asian, about three-feet-tall and 35 pounds.

The father is 39-year-old Xou Moua. He is described as Asian, five-foot-four and 135 pounds. He has brown eyes and birthmark on his left biceps.

He was last seen wearing a Superman T-shirt with an 'S' on the front. He was wearing jean shorts and black sandals.

Police are looking for a Red GMC Yukon, a full-sized SUV, with the Minnesota Registration FXN-038