With the Growing Hobby of AstroPhotography, Celestron Offers Consumers New Technology with EdgeHD Optics to See the Universe in HD

Celestron, the world's leading designer and manufacturer of quality optical equipment, is announcing the release of its newest line of aplanatic Schmidt telescopes, the EdgeHD series. EdgeHD is perfect for photographing the stars. 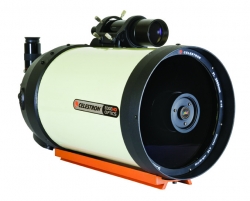 Torrance, CA, July 15, 2009 --(PR.com)-- Celestron®, the world’s leading designer and manufacturer of telescopes, binoculars, spotting scopes, microscopes and related accessories, is announcing the release of its newest line of aplanatic Schmidt telescopes, the EdgeHD Series. EdgeHD is perfect for photographing the stars.

You may have seen beautiful images of the night sky and have wondered if it’s even possible for you to take such amazing photos. It is possible and Celestron is making it easier and more affordable for the amateur astronomer or photographer looking for a new art form. After the much-anticipated release of the new CGE Pro Mount especially designed with the astrophotographer in mind, Celestron introduces its new optical line, the EdgeHD Series, with true Astrograph qualities for sharper more clear photographs giving you the clear edge.

What sets EdgeHD apart from the others? While some telescope optical designs can produce pinpoint stars across a curved focal plane, stars will appear out of focus at the edge of view when used with a flat chip sensor of a digital camera. The EdgeHD optical system is designed with a coma-free flat focal plane all the way to the edge of the field of view. EdgeHD optics produce a focal plane more than three-times flatter than a standard Schmidt-Cassegrain telescope and dramatically flatter than other competing coma-free designs. The result is a visibly sharper photograph that guarantees you visibly sharp stars across some of the largest CCD chips available today.

“The hobby of astrophotography is rapidly growing. People want to capture what they see through the telescope lens. Celestron is committed to creating innovative technology for the consumer; we have done that with the EdgeHD.” said Joseph A. Lupica Jr., president and CEO of Celestron, “It has superior edge performance that not only creates rounder, more pleasing stars, but actually improves the resolution and limiting magnitude when compared to other scopes of equal aperture, this produces amazing clarity for astrophotographers.“

In addition to Celestron’s new optimized optical design there are many new mechanical features engineered for better performance:

• Mirror Locks - Flexible tension locks hold the mirror in place and reduce image shift when rotating the tube around the mount.
• Tube Vents - Cooling vents located on the rear cell allow hot air to be released from behind the primary mirror.
• Fastar Versatility – All EdgeHD optical tubes are Fastar compatible for imaging down to f/2 with optional accessories.

Visit www.celestron.com/EdgeHD to learn more about the EdgeHD and see side-by-side comparisons of images taken with standard optics versus the new EdgeHD optics.

For a list of dealer locations and updates, please go to www.celestron.com

About Celestron
Celestron is the world's leading designer, manufacturer and importer of high-quality optical products including computerized and non-computerized telescopes and related accessories, binoculars, spotting scopes and microscopes. Since manufacturing its first telescope in 1960, Celestron has grown to become one of the world’s leading telescope makers, and enjoys brand-name recognition among serious amateur astronomers for superior optics, outstanding design, and innovative technology. Celestron’s innovative products continue to receive numerous industry and consumer media accolades, adding to an already impressive list that includes awards for product innovation from Reader’s Digest, Popular Science, PC Magazine, Popular Mechanics, the Consumer Electronics Association and more. Celestron sells and markets its products worldwide through a variety of specialty retail outlets and international distributors. Celestron is a global sponsor of International Year of Astronomy 2009. Celestron is a privately held company with corporate offices and manufacturing facilities, in Torrance, CA. For more information about Celestron please visit www.celestron.com.