Milwaukee, WI, September 22, 2009 --(PR.com)-- Bavaria is known for its millennia old beer making tradition and pronounced beer culture. Throughout history, Bavarians – noblemen and common folks –enjoyed beer as a cornerstone of their daily diet. Quality and taste of beer have always been a main concern in the villages and cities of the region. The famous Bavarian Purity Law of 1516, an early food safety law protecting Bavarians from inferior brews, is still in effect today.

Lammsbräu, a craft brewery that originated from the brew pub “The Lamb” in the Bavarian town of Neumarkt in 1628, goes further - much further. Dr. Franz Ehrnsperger, brewery owner in the sixth generation and visionary pioneer in sustainable brewing, is convinced that purity and quality of ingredients are essential for creating truly great beers. And thus, he established the “Ecological Purity Law,” a set of sustainability rules for his brewery.

To ensure highest quality, Ehrnsperger made the sourcing of raw materials an integral part of his sustainable brewing process. In contrast to most breweries which source malt, a key ingredient in beer making, from industrial operations with little control over quality and origin of the raw materials, Lammsbräu makes their own organic malt. Organic grains, fully traceable and sourced from contracted family farms, are converted in small batches without the use of chemical additives, resulting in high quality malt for Lammsbräu’s portfolio of organic beers. For more than 25 years, Ehrnsperger has been working with farmers in the vicinity of the brewery which grow organic barley, wheat and spelt for Lammsbräu in nutrient rich fields without the use of chemical pesticides, herbicides and fertilizers. Lammsbräu’s “Fair-to-Farmers” initiative has received praise for securing the long term survival of small family farms in the region.

Bucking the trend towards cheap hop pellets and extracts, Lammsbräu uses whole flowers from locally grown organic hops, which provide a noble bitterness to its beers. The mineral rich water used is pristine, low in sodium and drawn from the breweries own deep well. Furthermore, the brewery cultivates its own yeast, which is free of genetically modified organisms.

The quality and taste of Lammsbräu organic beers has been a stunning success with consumers. Historically, Lammsbräu was a regional beer only distributed within Bavaria. Today, consumers all over Europe enjoy the pure freshness of Lammsbräu beers, making it the leading organic beer brand in Europe. Independent Test Institutes such as Oeko-Test, Best-of-Bio and Beer Advocate awarded Lammsbräu beers with top marks. Two of the best selling Lammsbräu beers are currently being introduced in the United States:

Lammsbräu Organic Pilsner, a refreshing German style lager with a delicate balance of pleasant hop bitterness and gentle maltiness, and Lammsbräu Organic Dunkel, a smooth and creamy Bavarian dark lager for all occasions.

Sustainability continues to be Lammsbräu’s guiding management principle. In 1992, Lammsbräu became Europe’s first certified organic brewery. The brewery uses only glass bottles, no cans. Packaging materials are made from recycled paper, including bottle labels. Thermal heat and cleaning water are recycled. Power for the brewing process is generated with solar panels and natural gas. And the company’s delivery trucks run on vegetable oil. In 2001, Dr. Ehrnsperger’s visionary and ground-breaking work was awarded with the German Environmental Award, Europe’s highest prized “green” award. 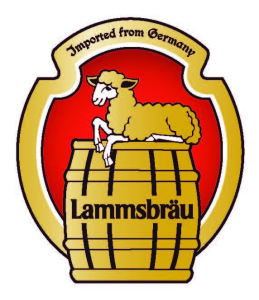