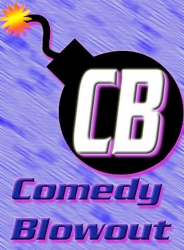 Ontario, CA, October 06, 2006 --(PR.com)-- Comedy Blowout Productions recently inked a deal with the Ontario Improv that will have them producing a monthly show that will feature some of the best comics in Southern California. This agreement brings the premier producers of live comedy events together with the world class organization that is the Improv comedy clubs.

Comedy Blowout Productions was formed in May of 2005 by comedians Gus Arredondo, Dustin Scott and Jessica Marchant. The idea was to produce and perform in quality comedy shows that featured the best talent available and attracted the largest audience possible. Their productions quickly gained a reputation for not just being comedy shows but bonafide comedy events. This new partnership will allow the group to take things to the next level. Gus Arredondo the company Head of Operations said, “We are very excited about this new partnership with the Improv. We are thrilled to be associated with the name that is the Gold Standard in live comedy." With shows scheduled through December 2007 they have every reason to be excited. The Comedy Blowout show will debut on October 10th 2006 at 8:00 PM. Tickets are on sale now the Improv box office or at www.improv.com. For more information about this show or to recieve discount coupons log on to www.comedyblowout.com