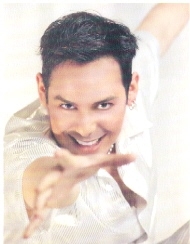 Tom Sime of the Dallas Morning News calls him "funny and irreverent." "You'll laugh your butts off when Jade Esteban Estrada takes center stage!" states Out Magazine. The Advocate calls him "exquisite" and NBC News calls him "America's Prince of Pride." Bob Fischbach of the Omaha World-Herald calls him a "multitasking Latino performer."

Estrada, who is a former choreographer to Charo and scratch vocalist for the Back Street Boys, is best known for his appearances on Comedy Central's "The Graham Norton Effect" and "In The Life TV" on PBS. His Latin dance music can be heard on the Golden Globe and Emmy award-winning police drama "The Shield."

The man Out Magazine calls "the first gay Latin star" headlined Nebraska Pride's mainstage in 2004 and 2006. He premiered his solo shows Icons: The Lesbian and Gay History of the World, Vol. 1 and its sequel at the Millenium Theatre in March 2005. His is co-founder of the Diamond Foundation, an organization that provides scholarships, mentoring and leadership programs for students in the state of Nebraska.

Citizens for Equal Protection is a nonprofit organization that advocates equality for the gay, lesbian, bisexual and transgender citizens of Nebraska. This is Estrada's first performance for the organization.

For more information log onto: www.getjaded.com. For high resolution artwork or to request and interview please contact Greta Golding at Vicarious New York at 646-342-8647 or email us at VicariousPR@aol.com.