Octavio Patxot - an Orlando-based Latin pop singer and composer - is proud to announce the release of his second CD, Historia de Amor. Released on the new independent Latin label, Diom Productions, the CD features 9 original compositions. Octavio’s music is a fusion of a wide range of Latin sounds and intensely personal lyrics, held together with radio-friendly commercial pop. 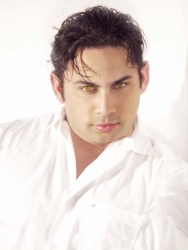 Orlando, FL, May 01, 2010 --(PR.com)-- The songs on Historia de Amor feature exotic Flamenco flourishes, the drive of salsa dura, edgy Spanish rock, even reggaeton, and an unmistakable bachata influence. But despite all these disparate influences, this is good pop music, plain and simple. Inspired by everyone from Juan Luis Guerra and Luis Miguel, to the bachata of his native Dominican Republic and his father (renowned bassist Manuel Paxtot, who’s played with everyone from Xavier Cugat to Tito Puente), Octavio has somehow managed to create a sound all his own. All 9 tracks are at once inventive and radio-friendly.

This CD marks a departure for Octavio, who was until now known as a bachata artist. His 1998 album, Triste y Afortunado received considerable airplay and critical acclaim in his home country. However, after returning to the States, Octavio felt a change of heart. “I wanted to write music that will reach more people. I grew up with bachata and I’ll always love it, but I wanted to create music that was capturing all the sounds I was hearing – and that would reach people from all countries and backgrounds.”

Historia de Amor is the first CD on the new independent Latin label, Diom Productions, which is based in Miami “We are excited about working with Octavio – it’s hard to find young artists that are marketable and have true musical talent these days,” states Diom Octavio Patxot. Octavio will be beginning a fall tour in support of Historia de Amor beginning in October 2010.