Boulder, CO, July 23, 2010 --(PR.com)-- Think-a-lot Toys, a leading manufacturer of games that build inter- and intrapersonal intelligence, has just released a deck of “everyday symbol cards” for adults and young adults designed to foster emotional intelligence through the use of archetypal images. The new card and book set, called The Insight Story Cards, follows on the heels of their recently released Story Play Cards.

Archetypal images have been used throughout history because of their simple power. Many of the most popular and highest grossing films, like Star Wars, Finding Nemo, and Shrek, owe their success to the power of the archetype especially when they are connected to “the hero’s journey.” The Insight Story Cards provide a simple, yet profound way for people to connect with their own hero’s journey and in doing so can lead people to greater psychological well being.

In our rush to reach happiness and enlightenment, many people have become increasingly stressed out. The average person needs a variety of tools on the path. Simple, visual cues or archetypal images provide the easy access needed to the inner workings of the subconscious—and can bring a little peace and internal connection.

The Insight Story Cards are comprised of 90 easily recognized and beautifully illustrated symbolic images from the world common enough for most anyone to relate to. For example, the Gate, Wheel, Earth, Rose, Shield, Cake, Snake and Sunrise are all familiar images. But they also have rich symbolism, which when looked at more deeply can connect us to the deeper parts of ourselves and lead to psychological health and well being; and it doesn’t involve eating more chocolate.

The cards are simple to use. One picks a card at random and sees what message it has for them that day. Or one sits down with their spouse and each picks a card that relates to what is going on inside them so the couple can begin a conversation about topics and feelings that are vitally important. Basically, the cards are used as a doorway into the richness that lies just below the surface.

The Insight Story Cards came about as the result of seeing just how effective a similar deck of simple symbol cards (now out of print) were with educators. Rachael Kessler, one of the pioneers of social-emotional learning who was willing to talk about the importance of nurturing one’s inner life in schools, used the cards in her workshops with educators as a way to connect participants to their inner life. She couldn’t use Tarot cards because of the connotations and prejudices people had towards them. But she could use the symbol cards she had at the time—and people loved them.

This success led Randy Compton, the creator of the cards (and an educator, mediator, long-time practitioner of social-emotional learning and close colleague of Rachael Kessler) to create a new set of cards similar to the ones out of print. The cards were created in collaboration with her lead trainer at PassageWorks Institute and other practitioners in the fields of social-emotional learning, yoga, and archetypal symbolism.

In a world where many people are looking for ways to work on their own emotional and spiritual development, The Insight Story Cards are a welcome addition to one’s personal growth toolkit. This card set has the potential of becoming a classic.

The Insight Story Cards by Think-a-lot Toys will be available in bookstores stores nationwide in late September and will have a suggested retail price of $24.99. A 268 page guidebook accompanies the cards. 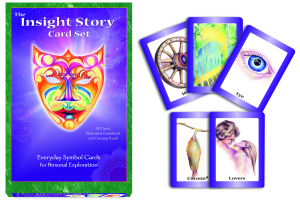