Medium Underground has just announced the release of their debut album Second Sight. The self–recorded and produced, full length CD was recorded at the band’s Castle Rock Studio outside of Baltimore, Maryland. 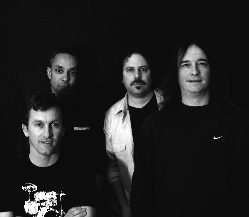 The album stands as a testament to the band’s creative and technical skills. “It was a challenge to work all angles of the recording process,” says Noland, who also engineered. “We also took on the artwork and website design ourselves. Quite an undertaking, but well worth it as evidenced by the final product.”

Medium Underground has been together for over 2 years now. The group members are all veterans of the music scene in and around the Maryland and Washington D.C. area. Currently, the band is gaining momentum by performing in local venues, increasing its multi-media presence, and writing new material.

The band lineup consists of:

The CD “Second Sight” is available online through CD Baby in addition to local retail outlets.  Digital downloads are available through iTunes. The band will be performing shows in North America over the next year with a tour of select European venues being planned for 2008.