The Crawdaddies, Baltimore’s favorite roots rock & groove band, sign with Loud Dust Recordings for the release of their 3rd album. With a track record of appeal to wide arraying audiences, The Crawdaddies deliver another great mesh of music styles that invigorate and satisfy. 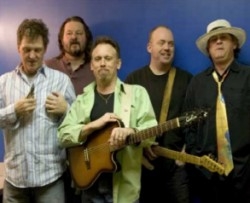 Burlington, VT, February 13, 2007 --(PR.com)-- On Valentine’s Day Eve, Keep Lookin Up is released by Loud Dust Recordings.  The Crawdaddies, Baltimore’s favorite roots rock & groove band, signed with Loud Dust Recordings for the release of their 3rd album on February 13th.  With a track record of appeal to wide arraying audiences, from children to senior citizens, The Crawdaddies deliver another great mesh of music styles that invigorate and satisfy.

The official release by Loud Dust Recordings of this fine collectible in the list of American music treasures is February 13th, seven days before Mardi Gras 2007 on Valentine’s Day Eve.  The always superb live sound of The Crawdaddies infuses Cajun, Zydeco, Funk, Swing, Soul, Reggae, Roots and Rock into an incomparable, groove-laden sound that is unquestionably its own.  As consummate headliners, the eclectic, good-time spirit of their sets has also allowed The Crawdaddies to share the stage with a wide range of artists including: Etta James, Charlie Daniels, Buddy Guy, The Radiators, Jimmy Cliff, C. J. Chenier, John Eddie, Joan Jett, The Spinners, Kid Creole and the Coconuts, Terrance Simien, G. E. Smith, Marcia Ball, Marshall Crenshaw, The Young Dubliners, Buckwheat Zydeco and Reel Big Fish.  The band continues to tour the and is a regular fixture on the national college and festival circuits.

In 2005 The Crawdaddies had a great live performance recorded at the WC Handy Blues Festival in Henderson, KY and it is still regularly aired on the Kentucky Public Television music program "Jubilee".  In August 2006, AOL Citiguide chose The Crawdaddies as "editors pick" for entertainment in Baltimore, MD.  The band has been selected for mainstage showcases at the prestigious National Association of Campus Activities National Conference in Nashville, TN and three regional N.A.C.A. conferences: Mid-America, New England, and the Mid-Atlantic.

The music of The Crawdaddies is in regular rotation on college and broad-format “triple A” radio stations nationwide and is currently receiving regular airplay in Holland, and The Netherlands.  The Crawdaddies' CD “Spice It Up” was nominated for a 2006 “Just Plain Folks” Music Award and the song "Gimme Some" from the CD "Spice it Up" can now be heard in over 13 million homes in the North East USA on the popular sports television series "Port-O-Call" which can be seen on NESN (New England Sports Network).