All Requests Live Entertainment to Open a Studio in Downtown Vancouver, Washington

Local entertainment company, "All Requests Live," will be moving into a permanent studio in the artist-friendly downtown area of Vancouver, Washington. ARL had previously been operating their DJ, Live Band and Recording Studio services as a sole proprietorship, serving the Portland, Oregon Metro Area.

Vancouver, WA, May 04, 2011 --(PR.com)-- Local entertainment company, "All Requests Live," will be moving into a permanent studio in the artist-friendly downtown area of Vancouver, Washington. ARL had previously been operating their DJ, Live Band and Recording Studio services as a sole proprietorship, based in the Fisher's Landing area.

Owner, DJ Dave, recently said: "We have been offering reasonable cost DJ/MC, Live Music and Pro Sound solutions for weddings, corporate/special events, and live/studio professional audio. We have been overwhelmed with the interest and response we've received. Our customers found our services to be professional, family-friendly and a great value. So much so, that we had to hire two additional engineers and move to a more permanent location to meet the demand."

ARL has a unique approach to live entertainment. DJ Dave along with the ARL Band strives to play music their audience wants to hear. DJ Dave expanded, "Most of our events are 80% material that the audience requests." The DJ’s take verbal, written and boasts real-time text message requests from the crowd. In another unique twist, the live band also takes audience requests. DJ Dave continued, "Our team of professional musicians takes requests from the crowd. It has a similar flavor to a piano bar where the audience asks for a Billy Joel or Elton John song, only our team has the experience to do this as a band. Lynard Skynard and Pat Benatar are some crowd favorites."

Often performing on stage with Dave is a deep cast of both local talent award-winning songwriters and vocalists with resumes from Los Angeles to Nashville. DJ Dave also said, "The on stage banter between the band members and interactions with the concert goers are definitely worth the price of admission. We understand that we won't be able to successfully pull off every request the crowd wants. But we will attempt it (laughs)." At that point, the verbal tongue in cheek comments start among the band. These musicians all have the talent to be on the road touring, but have all chosen to make Portland/Vancouver their home. They have day jobs, and just enjoy the opportunity to make people laugh and hear the songs they want to hear that night.

ARL boasts that no two shows are ever the same, both with the music and the family friendly dialogue. The majority of their performances are private events, but they will be performing an all-ages charity event at Pop Culture (address) on Thursday, June 2nd at 7pm. The $5 cover charge will go to help out victims of last week's tornado victims in the southeast. "Please come out and help us raise some funds for these families in need. The impacted areas have roots to some of the richest music culture in our nation." 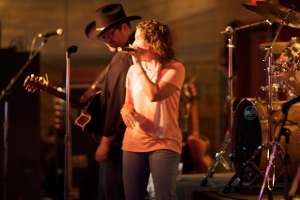 DJ Dave and co-lead singer, Jozi, hamming it up on stage for All Requests Live.