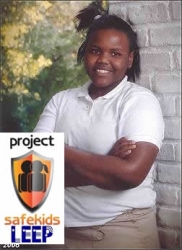 Springfield, IL, March 11, 2007 --(PR.com)-- The Texas Department of Public Safety and The Houston Police Department has issued an Amber Alert for Tesa Taylor.

The child is a 13 year old African-American female missing from a Homicide scene at 6900 Chasewood Dr., Houston. She is 5'4" tall and weighs 140 lbs. Tesa Taylor was wearing blue jean capri shorts, with a striped blue and navy white collared shirt that zips up the front.

She was last seen around 10:00 P.M. on 3/10/07 at her home. Her mother came home and found two men in the house. Both men fled the house when she came in. One of the men later returned but was shot by his companion and died at the scene.

Tesa Taylor was not in the house and her whereabouts are unknown.