According to recent survey results, most dentists do not feel that their gender affects their chair-side manner. Only 17% of dentists felt that women were, in general, more caring and nurturing to their patients than male dentists. Female and rural dental caregivers were most likely to find women more caring. 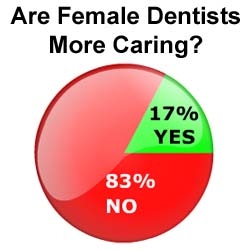 Women were also significantly more likely to vote "yes" when asked if female dentists were more caring and nurturing with their patients. Nonetheless, the majority of women did not feel that gender played a role in the quality of a dentist's chair-side manner. Two-thirds of female respondents voted "no" (67%), and 90% of the men did. Specialists also seemed to be somewhat more likely to find a woman to be more caring and nurturing. One-third of specialists (33%) voted "yes," while only 15% of general dentists did.

Most dentists felt gender didn't particularly matter. As a female orthodontist from Idaho wrote, "I have found that gender does not play a role in patient caring." A male dentist from Pennsylvania echoed the sentiment, saying, "The gentlest dentist I knew was a female, but the least gentle and caring one I knew was also a female." A Missouri dentist summed up his feelings on the matter: "Caring is a learned trait."

"Having employed 6 female dentists over the years," wrote one man, "I can say from experience that women can be just as rough and insensitive as men."

Even those who found women to be generally more caring did not find all female dentists to be in the same category. "Caring personalities will come through whether male or female, but in general women are more caring then men." wrote a male Illinois dentist. "More important, women are generally better listeners, and that comes through to the patient as caring."

Overt hostility towards female dentists was voiced by a few respondents."The problem I have with female dentists," wrote a male dentist from Mississippi, "is that they generally work far fewer hours and far fewer years than their male counterparts. As far as I'm concerned, they have simply wasted a slot in dental school. What's the good of any so-called 'caring' advantage if they don't practice dentistry?"

The Wealthy Dentist founder Jim Du Molin remarked on the range of opinions voiced by respondents. "Dentists are an interesting group to study because they’re remarkably in touch with average Americans. Dental providers see over 30 million people in the United States each month, and each visit is from 30 minutes to over an hour. That’s a lot of time for dentists to exchange ideas with their patients. Dentists' personal opinions (as reported through The Wealthy Dentist’s weekly survey) serve as a barometer of popular opinion and also give insight into one of the most influential professional groups in North America."

For additional information on this and other Wealthy Dentist surveys, visit www.thewealthydentist.com/survey.

About The Wealthy Dentist:

The Wealthy Dentist is a dental marketing and practice management resource featuring dental consultant Jim Du Molin. The site’s weekly surveys and dental newsletter are viewed by thousands of dentists across the United States and Canada. The Wealthy Dentist is a sister company of the Internet Dental Alliance, Inc. (www.internetdentalalliance.com). IDA is the largest provider of dental internet marketing websites, email patient newsletters and dental directories in North America.