As Ten-Year Anniversary Approaches, Controversial 9/11 Flipbook Continues to Garner Both Criticism and Praise

Artist Scott Blake aims to perpetuate a continuing dialogue about the 9/11 experience with one controversial project.

Omaha, NE, July 11, 2011 --(PR.com)-- Where were you on the morning of September 11, 2001? If you are like most who bore witness to the horrifying events of that day, you still recall – in vivid detail – exactly where you were and what you were doing when you first learned of the world-altering violence. Perhaps a more revealing question is, “Do you still talk about it?” Apart from the occasional political reference to drum up support for a war, few really do. However, artist Scott Blake continues to change this with one controversial project that encourages all of us to take another look at 9/11.

Blake has created a flipbook consisting of images of United Airlines Flight 175 crashing into the south tower of the World Trade Center. Accompanying the images are essays written by a wide range of participants, each expressing their personal experience of the September 11th attacks. In addition, the authors of the essays were asked to reflect on, and respond to, the flipbook itself. Not surprisingly, the majority of the essayists experienced the events through news network footage.

Blake is distributing his 9/11 Flipbooks to encourage a constructive dialog regarding the media’s participation in sensationalizing the tragedy. “My primary goal with the 9/11 Flipbook is to remind everyone how the mainstream media broadcast the violent attacks over and over,” Blake said. “The way I see it, the news did exactly what the terrorists wanted them to do. I'm concerned that if a similar tragedy happened again today, every TV and newspaper would do it all over again.”

To further illustrate his point, Blake recently conducted a media study of archived footage from September 11, 2001, counting the number of times major news networks showed the plane crashes, building collapses and people falling from the towers. “CNN showed the plane crash 109 times from 9AM to midnight, about once every eight minutes,” said Blake.

The BBC showed the planes crashing into the towers 240 times, roughly 16 times per hour. CNN showed the towers collapsing 161 times, or about once every five minutes. CBS was the first to show victims falling from the towers, beginning around noon and replaying the footage 13 times that day. These images are burned indelibly into the minds of everyone who witnessed the tragedy, whether firsthand or remotely. Said one New York essayist in Blake’s 9/11 Flipbook, “We could literally see the towers from our roof top. Although we had a better view on the TV.”

The flipbook has garnered praise from art critics as well. Kyle Chayka of Hyperallergic, a New York art “blogazine,” recently said of Blake’s work, “It’s not a cynical take on 9/11 or a Pop-styled, postmodern repackaging of the event, a la Warhol’s screen prints of race riot photos and car crashes. Scott Blake’s 9/11 Flipbook is more of a document, a reminder that what happened actually happened. Rather than seeking to provoke or anger, the flipbook becomes the target of feelings, opinions and memories rather than the cause of them.”

The 9/11 Flipbooks were recently accepted into the West Baton Rouge Museum in Louisiana where they will become part of an exhibit entitled “Cathartic Art: Remembering September 11th.” They will also be featured in an art show at Chemeketa Community College in Salem, Oregon titled “Where are we now? Artists reflect on America ten years after 9/11.”

Blake personally assembles each flipbook in his studio in Omaha, NE. The books are printed, cut and bound using top of the line archival materials. The large 9/11 Flipbooks with essays are signed, dated, numbered and registered on his website, www.911Flipbook.com

A percentage of the proceeds of every 9/11 Flipbook sold are donated to the Twin Towers Orphan Fund, the Fire Department of New York and the International Red Cross. The books may be purchased online or from a number of retailers including Printed Matter in New York, Atomic Books in Baltimore, Quimby’s Bookstore in Chicago, Bookart Bookshop in London, RAS Gallery and Bookstore in Barcelona, and Sticky Institute in Melbourne. The entire book is also available for download, free of charge.

Scott Blake is a self-professed tech nerd, DIY punk, and conceptual artist whose work has been featured in numerous art galleries, the New York Times, and on “World News Tonight.” If you would like more information about the 9/11 Flipbook or other Barcode Art works, Scott Blake may be contacted at scott@barcodeart.com 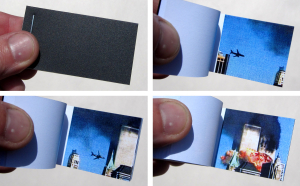 Scott Blake is distributing his 9/11 Flipbooks to encourage a constructive dialog regarding the media's participation in sensationalizing the tragedy. "My primary goal with the 9/11 Flipbook is to remind everyone how the mainstream media broadcast the violent attacks over and over," Blake said.