After several years in obscurity, “Raging Hormones”, the micro-budget comedy featured on Howard Stern and winner of the 1999 New York Independent Film Festival is finally available on DVD at: www.raginghormonesmovie.com. 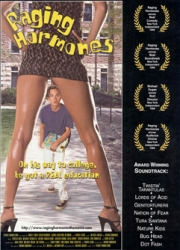 Boca Raton, FL, March 24, 2007 --(PR.com)-- After several years in obscurity, “Raging Hormones”, the micro-budget comedy that surprised everyone and won the “Best Comedy” award at the 1999 New York Independent Film Festival is finally available on DVD at: www.raginghormonesmovie.com.

In the wake of winning four awards at the film festival; “Best Comedy”, “Best Director”, “Best Soundtrack”, and “Audience Appreciation”, the break-out comedy and some of its crazy cast members were featured on the Howard Stern Radio show and also on his E! Network television program. HBO and Cinemax quickly licensed the film, and over its two year run, it gathered a huge underground, cult-like audience that includes both baby boomers and young stoners.

Michael Dugan, writer and director of “Raging Hormones”, said, “The audience for “Raging Hormones” is extremely loyal. Some people write me to say they have seen it 50 times.” The groundswell of demand has inspired Dugan to make the quirky, teen coming-of-age comedy available on DVD at: www.raginghormonesmovie.com.

“We had as much fun making the movie as people have when they watch it, and it shows. There may not be big stars, but there are huge laughs. If you have a twisted sense of humor, you will laugh until your stomach hurts”, Dugan added. “I put every penny I had into making this film, and so I had absolutely no money left to market it. When HBO and Cinemax licensed it I was in heaven, and now I have finally been able to get it on DVD and make it available to everyone.”

“Raging Hormones” features emerging actors Anthony Corrone (Bad Boys 2, Out Of Time), and Tony Hale (Arrested Development, Stranger Than Fiction). There are some stunning hard bodied women, and even very sexy BBW’s to add to the fun. The script is a delightful “coming of age” sex farce that pits the Rubenesque “Queen of the Supermarket” (Della Hobby) versus the smoking hot “Princess of the Country Club”, (Darlene Demko). They face off in a royal class struggle between “blue collars” and “blue bloods”.

For additional information about “Raging Hormones” or Thrill Street Entertainment, contact, Michael Dugan, or visit www.raginghormonesmovie.com. Raging Hormones is not sold in stores, but it is available on the website. It is only $14.95, but the comedy and humor is priceless.

Thrill Street Entertainment (www.thrillstreet.com) is an entertainment production and development company. After releasing its comedy hit “Raging Hormones” on DVD this year, it is now developing a new horror concept that could prove to be the most frightening series of films since the “Friday The 13th” and “Saw” franchises.