The “mockbuster” title was produced in 2010 with post production taking nearly a year due to the large amounts of CG involved. The film uses a combination of live action and CG characters in an environment that is 100% computer generated. “In order to make the film feel like a living comic book, all the sets and backgrounds are comic inspired 3D generated elements. The end result is a fantastic world of comic-book inspired cityscapes and sets,” says TomCat President/CEO, Chalmers.

The film tells the story of an ambitious scientist, who struggles to develop a serum to prolong life. He injects himself and transforms into the Amazing Bulk. The Bulk goes on a rampage through the city, destroying everything in his path. Film stars Jordan Lawson and Shevaun Kastl, who has appeared on NBC’s Heroes and more recently on CBS’ Criminal Minds.

Schoenbrun has made a name for himself editing more than 70 feature films in the past 2 decades, including stints on such high profile films as Mystic Pizza and Bull Durham. The Amazing Bulk is his directorial debut, which he quickly followed with Aliens vs Avatars, another TomCat Films title. “Lewis is an amazing and talented visionary. I hope to be making many more films with him in the future,” says the films prolific producer, David Sterling.

The film is just in time for the next crop of Super Hero movies coming out in 2012, including the much anticipated ensemble film, The Avengers, which features the Hulk. A DVD release of The Amazing Bulk is scheduled for early 2012 through Tempe Video.

TomCat is also in production on two additional “mockbuster” titles, Captain Battle and Codename: Beetle. The former in time for The Avengers, which features Captain America, and the latter in time for The Dark Knight Rises. 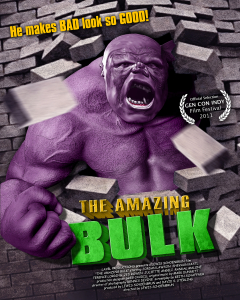 Poster Art for The Amazing Bulk