The Secret of a Former Teen Recording Star James Rocco, "It’s Between Us"

James Rocco Vice President of Programming at Ordway center for the Performing Arts in Saint Paul returns to his roots as a former teen recording star with his new CD "It's Between Us."

Saint Paul, MN, October 20, 2011 --(PR.com)-- In the seventies, a teenager named Jamie Alexander made his recording debut singing a few lines on Frank Sinatra’s “Watertown” album. The album was produced by Bob Guadio of the Four Seasons. Modern Screen Magazine announced the occasion with an article featuring Jamie, titled “How to Be a Teen Recording Star.”

This was the start of a musical career that took Jamie Alexander, now James Rocco, to Carnegie Hall and tours with Herbie Hancock, Wayne Shorter, and The Super Sounds. In between singing gigs, he starred on Broadway in “CATS,” all over the U.S. in “Jesus Christ Superstar,” and co-wrote and produced musical shows in his native New York.

He eventually accepted positions as director, choreographer, and producer, learning the joys of nurturing and guiding other performing artists. Those experiences were immensely valuable to Rocco, and led him into the second phase of a lifelong devotion to the entertainment business. He barely noticed that he’d stopped singing altogether. His life as a recording artist was known only among his closest friends. Last year, at the urging of a friend, he sang at a benefit for victims of the Haiti earthquake (you can see it on You Tube), and to his complete surprise, he fell again for his very first love: singing.

Rocco is currently the Vice President of Programming and Producing Artistic Director of The Ordway Center for Performing Arts, in St. Paul, Minnesota. His new release, It’s Between Us, says Rocco, “Is the CD I couldn’t not make. There are so many people like me, who lost their dreams in the twists and turns and demands of life. This CD is my waking up and realizing my passion never went away. And what I’ve learned in the intervening years makes singing so much fuller, so much more enjoyable even than before. I had to continue with my first love.”

The CD is Rocco’s “re-debut.” It’s filled with an eclectic mix of contemporary adult pop, featuring songs by Jackson Browne, Jennifer Warnes, Diane Warren and others. He’s backed by a great group of Twin Cities’ musicians led by Raymond Berg, the co-producer. On It’s Between Us, Rocco rocks and rolls as only a man of a certain age can. It’s introspective, personal, and all about circling back in on your dreams. A few years ago critics called Rocco a “tour de force” and “one of the finest voices to walk across the stage.” Listening to It’s Between Us, you’ll understand why.

James Rocco’s new CD, It’s Between Us is available at CD Baby, Amazon and iTunes - check it out and experience a man who’s secret is out.

There’s more about Rocco at www.jamesrocco.com 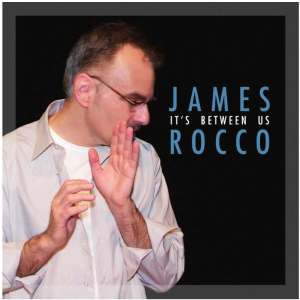 CD Cover James Rocco It's Between Us