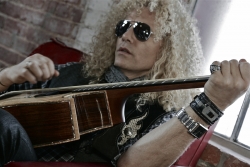 Hollywoood, CA, November 01, 2011 --(PR.com)-- “Its great to be back in 2011 and I hope this year we can be rewarded for all the hard work we have put into these productions. I’m looking forward to this year’s event and partying it up with the likes of Smokey Robinson who’ll be attending,” Steve Cooke said.

This years HMMA is recognizing Steve Cooke and his team in the “Best Music Video” category for “Radio,” where Steve Cooke is singing and playing guitar with Adam Lambert band members, Monte Pittman (Guitar), Tommy Joe Ratliff (Bass), and with the veteran Heart Breaker himself Steve Ferrone on drums (Tom Petty).

Steve Cooke and Monte Pittman were also in the video production for the second single “Gravity.” This single is up for this years “Best Song” Award in AC/AAA. Steve Cooke commented that, “'Gravity' was also a fantastic music clip to make! We made that one first with Marcus Brown on bass (Madonna/Seal) and Steve Sindelnyk on drums (Madonna/Seal), and I guess that set us up for 'Radio,' which we filmed 2 weeks later. The lead break in 'Gravity' features Phil X who is currently touring with Bon Jovi.

“We wanted Radio to cross over the generations, and I think we achieved that in this video. We are crossing the fingers that we will have something to bring home on the night. I’m just so happy that both songs made it into the Award finals,” he added.

It’s time the world knows about The True Artist of our Time: Steve Cooke

Watch Gravity and Radio at SteveCooke.net

Songs are also available through all Digital Media Outlets