Hoboken, NJ, December 11, 2011 --(PR.com)-- Hoboken author Roxanne Hoffman today announced the release of “In Loving Memory,” her ballad illuminating the gothic shadows surrounding a small town congregation from funeral to marriage, illustrated by Edward Odwitt. A recent widow, whose husband of 20 years, partner for 28, died suddenly last Valentine’s Day, Ms. Hoffman knows both rites of passage first hand. A self-proclaimed witness to life’s serendipities, she transports the reader from the scenes of deepest sorrow to ones of abounding joy through the voice of a male villager.

“‘In Loving Memory’ is an elegant, elegiac poem by Roxanne Hoffman, illustrated by Edward Odwitt in a style reminiscent of classic Edward Gorey. This somber, tender and darkly ironic verse is about the ceremonies of death and grieving ... as well as their parallels to the rituals of abiding love and remembrance. ‘In Loving Memory’ should be on everyone's shelves as it reflects on one of the darkest human experiences with insight and humanity in a charmingly gothic presentation,” says Garth von Buchholz, author, publisher and member of the National Book Critics’ Circle.

Written following her retirement in 2003 from a 20-year stint on Wall Street, the poem appeared in “Danse Macabre,” the Nevada-based online literary magazine published by Adam Henry Carriere. “Roxanne Hoffman has been a whirlwind of poetics for some time now. ‘In Loving Memory’ is not only a worthy addition to her oeuvre but an original, deeply human—and warmly humane—vision of the rites of final passage. Of course there is trauma, that of irreconcilable loss, but here Roxanne brings the full coin of her poetic mind to bear. In sustained elegiacal rhyme she paints a methodically wrought landscape that is beautifully subjective yet utterly universal. The portraiture is further enriched by the stark, almost child-like illustrations of Edward Odwitt. The sum effort is a melodic, imaginative riposte to the reverberations of loss, a moment heartbreakingly, heartwarmingly wrought into poetry,” says Adam Henry Carriere.

Ms. Hoffman says she had always envisioned her poem as an illustrated book in the style of Edward Gorey, but Gorey was, unfortunately, already dead in 2000. This past fall, at the Brooklyn Book Festival, she met Edward Odwitt, when he stopped by her table and presented her with his “Head for the Hills,” a book of short verse written and illustrated to encourage his younger brother to enjoy reading. Opening the book later at home, she realized she had met her illustrator. “Edward’s work ranks with that of Tim Burton, Edward Gorey, and Dr. Seuss, often echoing the gothic style of the late great Gorey, and with more than a whit of the whimsy of Seuss,” says Roxanne.

“It was a great pleasure working with Roxanne Hoffman having illustrated ‘In Loving Memory.’ Together, our collaborative efforts helped produce a complimentary visual for her astounding poetic ability,” says Edward Odwitt.

Edward and Roxanne are already at work on their next collaboration, “The Little Entomologist.”

Roxanne Hoffman worked on Wall Street, now answers a patient hotline for a New York home healthcare provider. Her work has been published widely in literary journals like “Amaze: The Cinquain Journal,” “Clockwise Cat,” “Danse Macabre,” “The Fib Review,” “Hospital Drive,” “Lucid Rhythms,” “Mobius: The Poetry Magazine,” “The New Verse News,” “The Pedestal Magazine,” and “Shaking Like A Mountain,” as well as in several anthologies including “The Bandana Republic: A Literary Anthology by Gang Members and Their Affiliates” (Soft Skull Press), “Love after 70” (Wising Up Press), and “It All Changes in an Instant: More Six-Word Memoirs by Writers Famous & Obscure” (Harper Perennial). Her vampire poetry can be heard during Dave Gold’s 2005 indie flick “Love and the Vampire.” She runs the small literary press Poets Wear Prada, since 2006.

Independent author/artist Edward Odwitt’s portfolio veers from symmetrical illustrations to graphics and pastels, as well as cartoons drawn primarily in black pen or pencil. His first book “Head for the Hills,” an illustrated book of poetry written for middle school audiences, can be found on his website www.edwardodwitt.com. He is currently compiling a collection of his artwork into a book due out by the end of 2011. 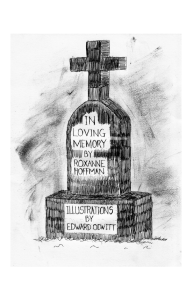 In Loving Memory by Roxanne Hoffman, illustrated by Edward Odwitt