Controversial Staten Island historian Dr. D. I. Kniebocker is set to release another chapter of his life’s work, The Forgotten History of Staten Island on March 17, 2012 – the 146th anniversary of the birthday of the great, American, photographer, Alice Austen. This free download on http://fhsi.wordpress.com will reveal the previously untold story of Austen's relationship with Author/Photographer Lewis Carroll.

New York, NY, March 13, 2012 --(PR.com)-- Dr. D. I. Kniebocker (The distinguished Staten Island Historian) is set to release another chapter of his life’s work, The Forgotten History of Staten Island on March 17, 2012 – the 146th anniversary of the birthday of the great, American, photographer, Alice Austen. The March 17th date is hardly a coincidence as the new free chapter is devoted to an account of the forgotten history of Alice Austen. It will appear as a free download on http://fhsi.wordpress.com/ the official blog of the Forgotten History of Staten Island. The new chapter will be accompanied with an illustration by noted artist Ed Weiss (who was awarded a 2011 New York State Council of the Arts Original Work Grant for his previous work bringing Dr. Kniebocker’s Forgotten History to life.

Dr. Kniebocker has generated much controversy in recent years both through his unusual methods of uncovering the past (which include archaeological expeditions on Staten Island and contacts with the spirit world) and his groundbreaking discoveries, several of which have not been generally accepted by historians who have more convention research methodologies.

This new chapter in Dr. Kniebocker’s epic work will no doubt continue his tradition of raising a few eyebrows, as it details the heretofore unknown long distance relationship between Alice Austen and the famed author/photographer/mathematician Lewis Carroll, who was best known for his children’s book classic Alice in Wonderland. According to Dr. Kneibocker, the young Alice Austen believed that Carroll’s book depicted her adventures on Staten Island and this that led her to initiate what would become a lifelong correspondence. Equally likely to prove controversial, is Dr. Kneibocker's contention that it was Lewis Carroll that inspired Austin to take up photography. But undoubtedly most controversial of will be his account of three-sided relationship of Carroll, Alice Austin, and her longtime companion Gertrude Amelia Tate that resulted in them uniting in a little known type of union referred to as a “Boston-Cambridge marriage.”

Whether you’re an admirer of Dr. Kniebocker’s work or a detractor, March 17 is certainly a day to mark in your calendar, for this latest chapter in his epic work will be the most controversial yet.
Contact
FHSI
Ed Weiss
718-442-5756
http://fhsi.wordpress.com/

The release plus photo of Dr. Kniebocker in action. 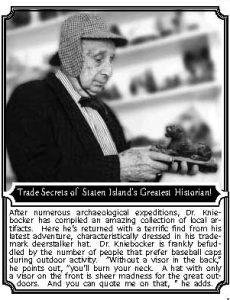 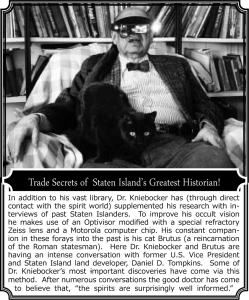