"Ice on the Grapevine," the second novel in the Hunter Rayne highway mystery series by R.E. Donald, has been short listed for a Global eBook Award. Independent Canadian publisher, Proud Horse Publishing of Vancouver, BC, released "Slow Curve on the Coquihalla" and "Ice on the Grapevine" as digital editions in the fall of 2011. Both will be available in print editions by August 2012.

Vancouver, Canada, July 07, 2012 --(PR.com)-- Ice on the Grapevine, the second novel in the Hunter Rayne highway mystery series, has been selected by judges as a finalist in the mystery category of the 2012 Global Ebook Awards. The winners will be announced at a gala awards ceremony at the University Club in Santa Barbara, California on August 18th.

The first two novels in the Hunter Rayne highway mystery series, Slow Curve on the Coquihalla and Ice on the Grapevine, were released as ebooks by independent Canadian publisher Proud Horse Publishing in the fall of 2011, and will soon be available to bookstores and libraries in print editions. Both novels have been receiving enthusiastic reviews from readers on various ebook review sites over the past several months.

The series features a former homicide detective who reluctantly resigned from a successful career with the Royal Canadian Mounted Police and took to the highways as a long haul truck driver in the hopes that the solitude of the road would help him heal from the pain of personal tragedy. A strong supporting cast includes his irascible female dispatcher, Elspeth Watson, who is as tough a boss as they come but is always ready to volunteer Hunter's help when a fellow trucker is in trouble. The author's many years of experience in the transportation industry help to keep the situations and characters engaging and realistic.

The novels are traditional 'whodunits' with complex plots, multiple suspects and - for most readers - a surprise ending. They feature realistic subplots involving the recurring characters that have more than one fan impatiently waiting for the next novel in the series.

R.E. Donald is working on the third Hunter Rayne highway mystery, set primarily in the resort community of Whistler, BC, known around the world as the home of the 2010 Winter Olympics. So far, the stories take place primarily on the west coast of North America, but the author has plans for future novels set in other locales, from the island of Oahu to the ‘Top of the World’ between Alaska to the Yukon.

Digital editions of Slow Curve on the Coquihalla and Ice on the Grapevine are available through most ebook retailers, including Amazon.com, Barnes and Noble, and Kobo. More information and links to retailers may be found on the publisher’s website at ProudHorsePublishing.com.
Contact
Proud Horse Publishing
Ruth Donald
604-530-5772
http://proudhorsepublishing.com 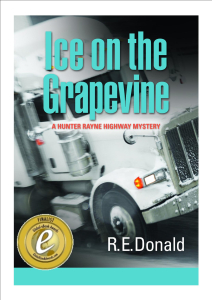 Ice on the Grapevine, a Hunter Rayne highway mystery

Cover for Ice on the Grapevine