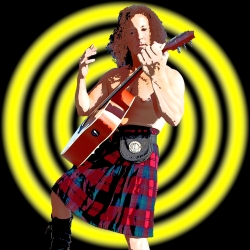 "This is hymnal folk storytellin' but with a Metal twist, backed by beautiful melodies, sung with a genuine fragility. King Kohn unravels a tumbling vocal style which along with the pluralism of instruments creates a strangely touching expression of unbridled joy." — Ilias G, Most Def Blogspot: Did Y'all Hear That (June 30, 2012)

What The Folk is a tribute to King Kohn’s love of folk music. It emphasizes eloquent, playful lyrics astride passionate vocals, whispers and growls. The production boasts thirteen diverse tracks, and is scheduled for release on September 13, 2012. The album is a return to the dynamic sound of the 1970s with a modern twist. From solo piano pieces and passionate guitar etudes to whimsical lullabies and angst-died anthems, What The Folk is a must hear for those questing for something new and bold. 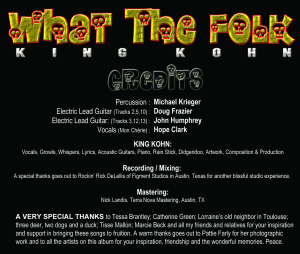 What The Folk Album Credits

Peruse the credits for King Kohn's new album including where it was recorded, mastered and the musicians on the production. 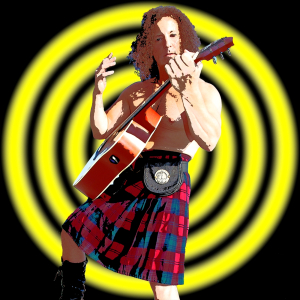 What The Folk Cover Artwork

What The Folk Banner

Small promotional album banner file for use on blogs, review sites and other web applications.

What The Folk Cover Artwork (low-res)

Low-res What The Folk album artwork.

What The Folk CD Logo (low-res)

Low-res What The Folk album artwork.