TLC is live on the Apple iTunes app store now, and priced at $13.99 for iOS. The title is a collaborative effort between publisher Trilobyte Games, LLC; Aftermath Media, and, Hennes Productions.

“We think this combination of interactive entertainment with touch-screen technology will completely change the way we experience movies and blur the lines between film and games,” said Rob Landeros, producer and co-founder of both Trilobyte Games and Aftermath Media.

“We believe that the iPad and touch-screen devices in general are the future of personal entertainment hardware,” he explained. “When first introduced on DVD, TLC received excellent reviews and considerable, critical acclaim. But the title, often described as being ahead of its time, could not be fully appreciated prior to the advent of the iPad and other touch tablets. Now is the time for titles like TLC, and touch-screen platforms are the enabling technology for a new generation of interactive entertainment. Trilobyte Games hopes to lead the way based on this title, and new ‘transmedia’ projects in our queue.”

In 1999, “Tender Loving Care” won the prestigious Award for Most Creative Use of Technology at the European Summit in Dublin Ireland. This prize was just one in a series of industry awards that recognized the product as the world’s most innovative extended-play, multi-path motion picture. TLC is notable because every viewer/player will have a movie/game experience that is unique.

Two-time Oscar nominee John Hurt (“Alien,” “Contact,” “Elephant Man,” “Harry Potter”) stars in this suspenseful tale based upon the novel by author Andrew Neiderman (“Devil’s Advocate”). Hurt plays an enigmatic psychiatrist named Dr. Turner who draws you into TLC’s twisted world of lust, power, and deceit by enlisting your help in analyzing the story’s characters: a beautiful, deluded patient, her dangerously unpredictable husband, and the mysterious, seductive psychiatric nurse who arrives to provide what may or may not be “Tender Loving Care.”

You are not only the viewer, you actually participate in the drama by exploring the household where the story takes place to find out what each of the characters may be hiding and what their personal motivations are. In that sense, the title feels like a game. At the same time, Dr. Turner explores your very own secret desires, predilections and aversions through a series of probing psychological (and often humorous) questions. Your answers to these questions are what ultimately determine how the story will unfold.

Though TLC is complex in its design and technology, it's not at all complicated to play. In fact, it is so intuitive and engaging that even techno-phobic viewers find it simple to interact with – and extremely seductive.

Landeros co-created the first break-through title on CD-ROM, “The 7th Guest.” TLC writer/director David Wheeler joined him as director of the successful follow-up, “The 11th Hour.”

TLC was first released to retailers in Europe. European reviews and customer feedback was overwhelmingly positive. The Times in London, for example, called TLC “...an adult caper with an enticingly voyeuristic style...Verdict: 9 out of 10. Supreme thriller with a twist."
Contact
Trilobyte Games, LLC
Charles McHenry
541-840-2243
www.trilobytegames.com

A comprehensive backgrounder that looks at the plot, cast execution of the title with links. 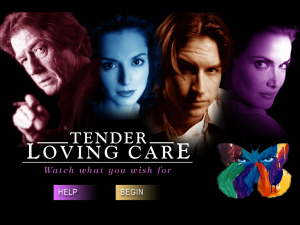 An image file featuring the TLC's stars and logo