Amber Shadows and the Missing Wands 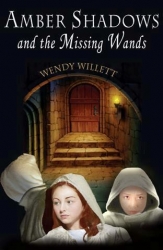 Wauconda, IL, July 28, 2007 --(PR.com)-- Outskirts Press is pleased to announce the publication of Amber Shadows and the Missing Wands, the lastest work of award-winning poet, author, and sketch artist Wendy J. Willett. It is a lively and engaging story of an endowed, thirteen-year-old White Magic witch-in-training who sets off along with her two best friends to rescue her parents, grandparents and find two magic wands. Facing the deadliest of beasts, the three friends find themselves in life-threatening situations managed by the Dark Magic hand of Lady Gondara.

Immediately upon entering the pages of Amber Shadows and the Missing Wands, the reader is thrown into a mystical world that is far from the ordinary. Two secrets have remained hidden and protected within an antique trunk in the Shadows' family attic. However, unbeknownst to the Shadows family, hidden beyond their back yard in the eldest rings of wood, is a third secret. Amber Shadows, the youngest of three, discovers two of these three secrets while searching in the attic for information on an extraordinary witch or wizard relative. On the night of her thirteenth birthday, Amber is awakened by an apparition, who leads her to discover the third secret. Oblivious of the danger she is now in; Amber manages to convince her two best friends to join her on a quest. Terrifying events unfold as the three friends search through an underground castle for Amber's parents, grandparents, and two wands with the greatest of powers. Amber and friends must find their way through conjured up illusions and escape life-threatening traps, defend themselves from deadly beasts, and manage to return home safe and sound with their friendship still intact. But will they?

Amber Shadows and the Missing Wands gives a new twist in storytelling a popular genre. "If you are expecting to read a story about a medieval princess, forced to marry a Dark Magic wizard more than twice her age, or missionary knights setting off to fight and conquer a monstrous dragon guarding two stolen wands of power and glory, then you would be very much mistaken," Willett says. "It's not your traditional male character leading the adventure using magic; rather it is a story of a teenage female facing emotional distress where her missing family is concerned, and life-threatening situations using White Magic to survive." Amber Shadows and the Missing Wands is the first book in a series of four novels featuring the spunky heroine, and it is certain to be one of this years' best sellers, and a welcome addition to libraries and home bookshelves around the world.

About the Author:
Wendy J. Willett's work is inspired by her love of the written word, sketching, live theatre, the silver screen, violin and cello music, comedy classics television, and reading. In 2006, Ms. Willett's story, Magical Love was published by Joyous Publishing in, Internationally Yours: Prize Winning Stories. Her award-winning poetry can be found in the numerous anthologies, including Best Poems and Poets of 2002, and again in 2004. She is a graduate of the Institute of Children's Literature and has been writing furiously since graduation in 2003. Ms Willett currently resides in Wauconda, IL with her two children, and is currently working on the second book in the series, Amber Shadows and the Crystal Locket.