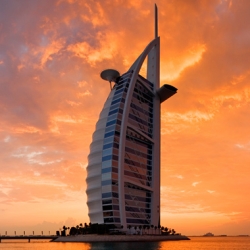 The Seven Star team’s most recent travel agenda included a review of the “world's most luxurious hotel,” Burj Al Arab (Tower of the Arabs). Although no longer the world’s tallest hotel, Burj Al Arab is still Dubai's most iconic building, featuring the world’s tallest atrium (180 meters = 590 ft), residing on its own man made island and resembling the billowing sail of a dhow. The Seven Stars team presented the Seven Stars Award in December 2012 after an review of Dubai's most iconic building to the management and staff of Burj Al Arab. "The level of service we experienced during our stay at Burj Al Arab was what one would expect from a true Seven Star hotel or resort. This hotel is uncompromisingly well managed by GM Heinrich Morio and his team is impeccably well trained; definitely living up to its reputation," said Mr. Buehrmann, President of Seven Stars and Stripes. The Seven Stars team has been reviewing the finest hotel, resorts, spa and restaurants around the globe for over a decade and were on their way home from South Africa where they filmed the Seven Stars Travel Show at "Karkloof," Africa's first Seven Stars "Safari Spa."
Contact
Seven Stars and Stripes
Ingrid Lemme
1800 7AWARD1 ext 2
www.SevenStarsandStripes.com 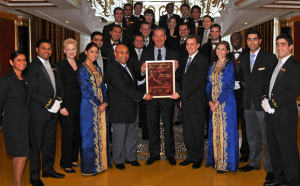