Classic Chevrolet Show Cars and Major Vendors from Across the Country-Sept. 28-29, 2013.

Orange City, FL, September 09, 2013 --(PR.com)-- The Corvette Chevy Expo will kick off their inaugural event at Dallas Market Hall, September 28-29. The two-day Chevrolet extravaganza is an all-indoor Chevy Event. The event features Chevrolet show cars as well as Major Vendors from across the country.

Danny Reed, from Austin, Texas will display his extremely rare 1969 Chevrolet Corvette called the "Astrovette" at the Corvette Chevy Expo. Alan Bean once owned this historical Corvette. Alan Bean was an Apollo 12 astronaut and the fourth human to set foot on the moon.

Also on display, from Friendly Chevrolet, will be the 2104 C7 Chevrolet Corvette Stingray. The 2014 Corvette Stingray is the most powerful standard model ever, with an estimated 450 horsepower (335 kW) and 450 lb-ft. of torque (610 Nm) and can accelerate from 0-60 in less than four seconds.

The Chevrolet specific event serves as an ideal platform for leading professionals in the industry to interact with customers who attend. There are prominent companies that exhibit at the show, displaying and marketing different types of accessories, parts, performance systems, that are related specifically to Chevrolet models. Shoppers will find plenty of Chevrolet memorabilia and automotive logo apparel for sale as well.

In addition to the large selection of commercial vendors, the Dallas Market Hall will also accommodate over 100 show vehicles, all beautifully exhibited, in the indoor facility. Corvette Chevy Expo is a fully judged event with numerous classes in the traditional Concours style. The show vehicles compete for the top titles, Best of Show Chevrolet, Best of Show Corvette, Best of Show Camaro, and Best of Show Chevy Truck as well as People's Choice Award. Spectators enjoy a large range of custom vehicles as well as matching numbers Chevrolets. Concourse Chevrolets that achieve 98-100 points also will be awarded the President's Award.

“We have top quality cars already registered for our inaugural event. The caliber of the cars keeps ratcheting up,” said Bill Wolf Bill Wolf, CEO of Vette Vues Magazine, and the Corvette Chevy Expo. "This show will not only has some of the best cars in Texas, but also features a large selection of commercial vendors from across the country selling Chevrolet products. We are excited the expansion of our footprint in Texas at the Dallas Market Hall, September 28, 29, 2013. For a first-year event we got on the map very quickly.”

The Corvette Chevy Expo is open to the public beginning Saturday morning at 9 AM and closes at 7 PM.

Sunday hours are from 9 AM until 6 PM. Sunday also features the Miss Corvette Chevy Expo Bikini Contest conducted by Swimsuit USA starting at 3 PM followed by the Awards ceremony at 4 PM.

There are food concessions on site, for a full day of enjoyment. 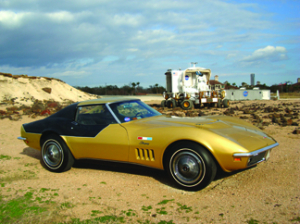 Danny Reed, from Austin, Texas will display his extremely rare 1969 Chevrolet Corvette called the "Astrovette" at the Corvette Chevy Expo. Alan Bean once owned this historical Corvette. Alan Bean was an Apollo 12 astronaut and the fourth human to set foot on the moon.