What's hot in Miami? New artist, Jerome Melo, a native Miamian who has just released his video, "M-I-A Nights" on You Tube. Coming up for Melo --- a collab in the studio and a college circuit underground tour.

Miami, FL, September 11, 2013 --(PR.com)-- New artist, Jerome Melo, releases the video of his single “M-I-A Nights”; hitting You Tube at: http://www.youtube.com/watch?v=El6dZ9GujYI. Transported to the notorious Miami party scene, Melo’s smooth flow is reflective of the cool sizzle of this town as he raps about his life living it up in the 305.

Melo has been performing up and down the East Coast introducing YP (young people) to his sic beats and lyrics; creating converts everywhere he goes. Stepping back into the studio to work on his new album, expect great things to come from this young artist.

Jerome Melo Bio -
Jerome Melo’s music reflects his Miami lifestyle, both the laid back “MIAMI NIGHTS” and the hype of the unleashed party scene. Expect to see this new talent bring an outbreak of fresh sound and lyrics as he leads the charge for the next generation of music mavens. Just as his hometown Miami never sleeps, Melo and his crew will not sleep until the barometer busts.

Drawing inspiration as an artist from old school hip hop greats, his debut mixed tape, “Medulla Obligations” was recently released in March 2013. http://www.reverbnation.com/jeromemelo It’s loosely based on an autobiographical snapshot of Melo’s life in the MIA; his pursuit of success while caught up in the night life of drugs, parties and sex.
Contact
Jackson Ink
Ryan Mae Sweeney
808-393-7740
jacksoninkmedia.com/ 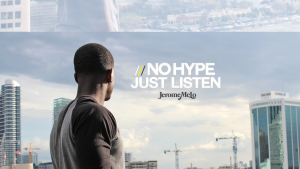