In "Cornerstone," Valencia Roth died to protect her daughter. In "Jaded Stone," she'll live for her. 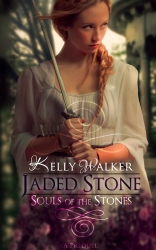 “Writing 'Jaded Stone' left me thinking a lot about how things can sort of come full circle in our lives” Kelly Walker said. “Although deceased, Valencia played a prominent enough role on the trilogy, that I felt the need to tell her story. Without a doubt, Valencia is a character that is often misunderstood. She's ruthless, determined, and unwavering in her convictions. Her commitment to her land comes before everything, and that leads her to questionable choices during the trilogy. After 'Second Stone,' I had readers asking, 'But how did she become so jaded? What happened?' and hence, the idea for 'Jaded Stone' was born.”

"Jaded Stone" at its core is about the inner strength that character Valencia Roth possesses. “There's an important scene in 'Jaded Stone,' where Valencia does something that sort of even surprises herself, but she does it because she knows it is crucial that she show her people she can be what they need, that she will do what is right for them. It's her #SHOWOFSTRENGTH,” Walker said.

In honor of the book’s release, Walker is asking readers and fans to share the women in their lives that have shown strength. “Sometimes, it is only through trying to appear strong to others, that we find out how strong we truly are inside. The idea of celebrating the strength of women wheedled into my brain, and I knew I wanted to do something big with it. It's about more than one book, or one character, or one woman.”

Walker continues by saying “As women, we're awful about not telling each other how much we admire and respect each other. We can tend to be a bit catty, even. I know I don't tell the women in my life often enough about how much they mean to me, and how much I admire them. In line with that, I've come together with several other authors to give readers an opportunity to tell the women in their lives just how strong they think they are, and to give them a chance to win an awesome prize pack filled with swag, books and over $200 in gift cards.”

The #SHOWOFSTRENGTH event will begin with the release of "Jaded Stone" on November 20th and continue until the winner is chosen on December 20, 2013.

For a review copy, interview request or more information about #SHOWOFSTRENGTH please contact:

PDF file of the press release