Charleston, WV, November 20, 2013 --(PR.com)-- Fictional game designers Hsu and Chan Tanaka, who appeared for over a decade in the self-titled comic that began in print magazine "Electronic Gaming Monthly" and continued on news site 1up.com, are now starring in their own animated series.

"Hsu and Chan's Grand Designs" sees the game-developing brothers hosting their own talk show, ostensibly addressing the hot-button issues of the modern gaming landscape, but more often digressing into crass self-promotion or conducting bizarre videogame "research" with the help of -- or occasionally upon -- their animal sidekicks.

The show is created by West Virginia-based Spookingtons Media LLC, which has recently provided animation for a series of shorts on the popular humor website Cracked.com. Spookingtons studio president and "Hsu and Chan" creator Norm Scott explains the show's hand-drawn aesthetic:

"We knew we didn't want this to look like just another cut-out web series, regardless of the budget. We pretty much raided the toolbox -- there are visual tricks in there running the gamut from Disney movies to 'Scooby-Doo: Where Are You?,' and the end result, which we're quite proud of, is a profoundly inexpensive show with network-quality visuals."

The first two episodes of "Hsu and Chan's Grand Designs" are already available for viewing. Episode one, "First Person," examines gameplay diversity in first-person shooters, while episode two, "GTALERT!," takes on the social consequences of the "Grand Theft Auto" series.

"I think this is an excellent format to introduce these characters to a new audience," says Scott. "For one thing, there's much less reading required." 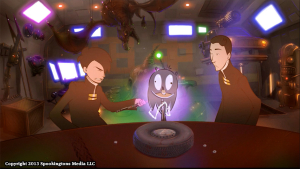