Polaris Propulsion Labs Receives Chilean Vendor Approval at FIDAE, While Releasing the TJ-200 a Small Turbojet Engine for Use in Small Missiles and Drones

Polaris Propulsion Labs receives accredited vendor status with Chilean military at FIDAE trade show today as it showcased its latest product the TJ-200 a small turbojet engine for use in small missiles, and drones. 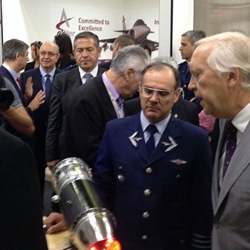 "The TJ-200 is specifically designed for use in small missiles, drones and aerial targets. Our twin-blade turbojet engine technology is perfect for these military applications, and this show is the perfect place to showcase the product," said Maurice Lopes the company's CEO.