Richard Deane Terrell has been selected as Industry Leader of the Month of March 2014. Previously, he was recognized as a Roundtable Representative and Professional of the Year 2014 in Time Series. 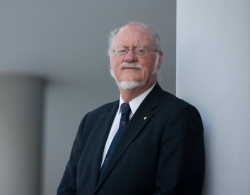 Farmingdale, NY, June 26, 2014 --(PR.com)-- Richard Deane Terrell was born in Adelaide, South Australia. He is the Professor Emeritus at ANU College of Business and Economics, the Australian National University. Dr. Terrell attained his B.Ec. with Honours at the University of Adelaide and Registered as B.Phil Student at Oxford. His Ph.D. is from the Dept. of Statistics at the

Australian National University. His extensive professional career spans several decades from 1974 to 2000 and includes service as Head of the Dept. of Statistics, Faculty of Economics, the Australian National University, Dean, Chairman of the Board of the Faculties and Deputy Vice Chancellor, the Australian National University. In 2002, Dr. Terrell was awarded the Order of Australia. He has numerous published works to his credit and is affiliated with the Canberra Symphony Orchestra, the Royal Order of Australia, the Centre for Arab and Islamic Studies, the Sir Roland Wilson Foundation and the General Sir John Monash Foundation. Dr. Terrell is married to Jennifer Anne Kathleen Doman and has 3 children. In his leisure time, he enjoys vineyards, Australian rules football and cricket.

The Industry Leader of the Month membership in America’s Registry is reserved for those select members who have achieved and maintained an illustrious career over a long period of time. Such is the case for Richard Deane Terrell who began his career in the early 1970’s through to the 2000’s.
Contact
America's Registry of Outstanding Professionals
Bea Hanley
516-997-2525
www.americasregistry.com