Retrieving Data on Mobile Phone Will Never be a Daydream: Coolmuster Lab Fone for Android Gives You the Ability to Recover Lost, Deleted or Formatted Data from Android

Coolmuster studio, the leading provider of software and services all over the word, is pleased to announce a great update of the Lab Fone for Android program. In the latest version, Coolmuster have fixed lots of bugs and improved the stability of the tool so that users can experience more powerful functions than before. 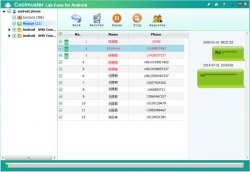 New York, NY, November 11, 2015 --(PR.com)-- "In the modern digital life, people becomes more and more dependent on digital products, such as mobile phones, tablet PC, etc. However, the more you’re using these devices, the high risk of losing data you'll face. Thus, it is not strange to find that more and more users complained that data on their digital devices are lost unconsciously, and sometimes this lost data are very important for them," said Franklin, the founder and CEO of Coomuster Inc. "That's why Coolmuster developed Lab Fone for Android and keeps improving the functions and performance of the products. We hope all of Android users will never worry about the data losing problem after owning this tool."

Compared to the 1st version, the latest upgraded Lab Fone for Android has become more stable, and the scanning speed become faster. And it can support more Android devices on the market. With it, you can conduct a deep scanning on your connected Android devices, and effectively recover data like contacts, text messages, photos, music, videos, documents, etc. from almost all popular Android devices.