Vancouver, Canada, January 30, 2016 --(PR.com)-- Available now on the App Store and Google Play Store, command your own Air Force and unleash fury over the skies with Air Force Fury. Players will get to manage their own modern Air Force base, amass an arsenal of fighter jets, bombers, gunships, mechs and more, and dominate the skies through the hundreds of missions and the real-time world map. AFF brings base-management to the skies and right into the danger zone.

Unleash Fury in the Skies
- Intense combat: Select aircraft, tactics, and formation, and strap in for all-out warfare.
- Hundreds of missions: Take on a massive solo campaign and challenge players globally.

Command Your Air Force
- Build your Air Force Base: Expand your base, mine resources, maintain your fleet.
- Upgrade your Facilities: Build and upgrade each co-dependent facility.

Dominate with Global Alliances
- Power in numbers: Alliances get access to Special Missions and Bonuses.
- Global Rankings: See how your Alliance stands against the World.

E-Link Entertainment, a mobile games publisher that specializes in bridging international markets, is proud to present Air Force Fury as its first major action/strategy game to a global audience. Air Force Fury is available worldwide on the App Store and Google Play.

About E-Link Entertainment
E-Link Entertainment is a publisher and developer of mobile interactive content. E-Link publishes content on platforms worldwide with their expertise and integrated network, and develops mobile content, in addition to other services. E-Link was founded in 2013 as a collaboration between gaming industry experts from both East and West, helping bridge the gap for the industry globally. 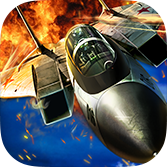 Screenshots of the game