James G. Montagnino Recognized as One of the Top 10 Men of the Year by Strathmore's Who's Who Worldwide Publication 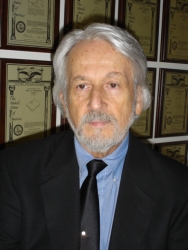 St. Charles, IL, March 19, 2016 --(PR.com)-- James G. Montagnino of St. Charles, Illinois has been recognized as one of the Top 10 Men of the Year for 2016 by Strathmore’s Who’s Who Worldwide Edition for his outstanding contributions and achievements in the fields of engineering and consulting.

About James G. Montagnino
Mr. Montagnino has over 50 years experience in the engineering and consulting fields. He is the President and CEO of Production Engineered Designs, Inc. which is an international consulting firm providing global resources in design, manufacturing, engineering and technology transfer. He is an experienced engineering, marketing and operations executive with extensive experience in leadership, business development, product innovation, Asian sourcing/procurement, strategic planning and project management skills in consumer products, business machines, scientific instruments, aerospace and tool/machines. He is responsible for strategic planning, business expansion/development, contract acquisition and negotiation, product development, marketing, project leadership, client relations, patent development and cost controls. Mr. Montagnino serves as a consultant to Asian suppliers. He is affiliated with the Society of Manufacturing Engineers, the Society of Plastics Engineers and the Hong Kong Manufacturers Association. He was recently honored on the Reuter’s Billboard in Times Square in New York City by the National Alliance of Male Executives.

Prior to starting his firm in 1992, Mr. Montagnino served as a Lead Designer and Field Service Engineer for Perkin-Elmer. He was also employed with CBS, Pitney Bowes, Savin and Clairol/Bristol Meyers and was a contract employee for The Sharper Image, KAZ (Vicks), Sunbeam and Tanita. Through his various employers, he worked with scientific instruments such as the Saturn Space Program dealing with optics, the Panoramic Reconnaissance Systems used during the Vietnam War, the first Orbital Reconnaissance Systems and the first video technologies. Mr. Montagnino worked with business machines including electronic mailing systems, postage meters, automatic mail processing systems and copier systems that included 23 utility issued patents. His work with scale/weighing system technologies involved weighing body fat and body composition, HealthOmeter and weigh on the fly for mailing systems resulting in 41 issued patents. He also worked with personal wellness systems resulting in 61 patents. Mr. Montagnino helped design tools and machines for Bullard Machine Tool Co., Singer Sewing Machine and Burndy Corp.

Mr. Montagnino believes in thinking outside the box. Having spent more than 50 years in various areas of product development and innovation (Tool & Machine Design, Business Machines (mailing systems, copiers, printers, paper conversion), Aero Space, Reconnaissance Systems, Scientific Instruments, Video Technology, Personal Hair Care appliances, Personal skin care appliances, scale technologies (postal, medical, weight, diet program scales, body composition, body fat, acute care, medical) , he still finds it amazing how many of his peers still approach design and innovation in various product categories by initially telling others what cannot be done. Having trained under several geniuses’ during the 1960’s, he was taught everything is possible and the only limits we have are imposed by our fear of failure. One very famous person he worked under once told me “Don’t tell me what you cannot do, tell me what you can do. Any fool can tell me what cannot be done, but imagination without limits or fear can move us to new heights and challenge the status quo.” Mr. Montagnino believes that whether it is design, marketing or engineering, it is crucial to think outside the box as very few dare to do so.

"Everything is possible and the only limits we have are imposed by our fear of failure." - By James Montagnino